How lovely is your dwelling place, O lord of hosts! Psalm 84 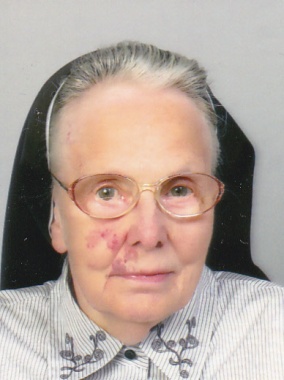 Sister was born in Asten as the second child of Wilhelmus van Goch and Maria Petronella Cuypers. They had 9 children, 2 boys and 7 girls. Soon they moved to Gemert, where sister had a very good youth.

Being the eldest daughter, she learned to help take care of her younger brother and sisters. She took a course in family assistance, but due to her frail health she could not work much in families.

She then went for training as a kindergarten teacher. In those days the distance between Gemert and her school was too far. For this reason she lived in her aunt’s uncle’s and house for a few years.

They were good friends with the Sisters of Notre Dame who worked in the Parish in Helmond. This is where Sister Jean Baptist met with sisters and after she completed her teacher’s training, she joined our Congregation at the age of 30.

After her profession she worked as a kindergarten teacher in Hoensbroek and Lauradorp.

Later she was responsible for groups of children in the children’s homes in Wassenaar and in Herpen.

Sister worked hard in her own way. No work was too much for her, not even after retirement. She took care of diets in the kitchen, helped take care of the sick, worked at the reception desk, took care of the refectory, and other household chores. She did them all with pleasure!

For everybody who knew her, she was an example of solid Faith in God. Now that we have to live without her, we don’t want to be sad but grateful to have had her in our midst.