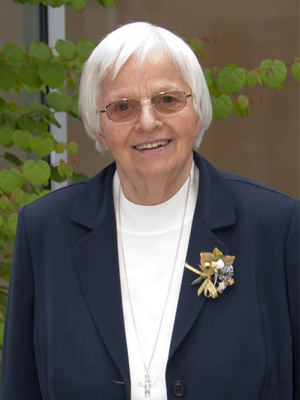 Sister Maria Johannette was the youngest of eight children. She grew up in a family of deep faith, which shaped her. Together with her siblings, she had a happy, carefree childhood. Besides down to earth faith cheerfulness, warmth and security were basic foundations of the feeling of togetherness. That is why Sister M. Johannette maintained close relationships to all her relatives of various generations.

From 1933 to 1941, Maria attended the basic primary and secondary school in Polsum. Then she helped her parents with the housework and on their farm because her brothers had been drafted for the war. From 1946 – 1947, Maria learned cooking and housekeeping with our sisters in Leuth near Kaldenkirchen. There she came to know religious life. Since Maria was a seeker as to faith and longing for “more“, she asked herself intensely whether religious life could also be her life journey.

In 1949, Maria asked for admission to the Congregation of the Sisters of Notre Dame in Mülhausen / Lower Rhine. After her religious formation, Sister Maria Johannette ministered in different boarding schools of our Congregation. That was a great challenge for her, which she accepted because she trusted in God’s help. She was able to do a lot of good for the students entrusted to her.

From 1974 – 1977, Sister M. Johannette was trained as pastoral minister because the transmission of faith was very important to her. In this ministry, she worked in a beneficial and fruitful way in various places. Her years in Berlin (1985 – 2011) were the “highlight“ of her pastoral work. First, she ministered in a parish with joyful enthusiasm and tireless commitment and then for ten years as a pastoral minister for elderly people. She could uplift, console, and encourage many people and even help them find their way back to faith. She offered days of recollection and meditations, which were gladly accepted. She wrote texts for meditation based on her personal faith and life experiences, which were published.

Since 2011, Sister Maria Johannette had lived in Kloster Annenthal. She was open and friendly to her co-sisters. She was a woman of prayer whose life was based on God’s love. She liked to share her life memories entitled “The story of a happy nun.”

Sister Maria Johannette’s attitude was marked by joyful gratitude for God’s abundant signs of love during her long religious life. She was grateful to her co-sisters and to the employees for their kind assistance and service.

During the last days before going home to God, she was able to let go of her life calmly and peacefully, to give herself to God filled with the Advent expectation that He would soon fulfill the longing of her heart.