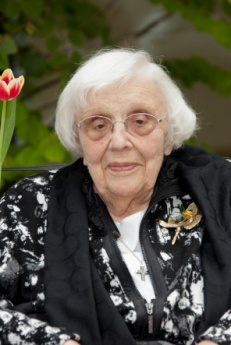 Sister Maria Josefinia grew up with a sister and a brother in Adendorf near Bonn. Her father was a master potter. When talking about her childhood, Sr. M. Josefinia conveyed the impression that she had a happy and carefree childhood marked by the joyful way of life in the Rhineland of which she was proud all her life. She went to school during the time of National Socialism. After entering into the congregation and after making her profession in 1950, she studied German, biology and geography. In academic societies, she participated in passionate discussions about the catastrophes of Nazi dictatorship and the Second World War. Living in Bonn, West Germany’s new capital, she personally experienced important political events, steps leading to peace and democracy. Until her old age she remained strongly interested in sociopolitical events. That also applied to the development in the Church and in the congregation which she questioned critically, animated, or supported.

Sr. Maria Josefinia was a teacher through and through. Since 1958, she taught in our schools in Bonn, Berlin and Ahlen. In Ahlen, she was principal of St. Michael high school from 1971 to 1991. It was a turbulent period marked by ever new educational reforms. It was important to Sr. Maria Josefinia to maintain, to clarify and – if necessary – to defend the character of a private, catholic school. As education spokeswoman of the congregation she also supported the other schools in the province of Coesfeld in this regard.

After her retirement in 1991, Sr. M. Josefinia started a new task in Berlin. After the fall of the wall in 1989, our Theresienschool in the eastern part of Berlin needed assistance with the reconstruction and the necessary reorganization. From 1990 to 2006, Sr. M. Josefinia accompanied this process with total commitment.

Back in Ahlen, she could devote her time to her personal interests for 10 years. She accompanied different groups to Rome, which she had done many times in former years. She loved the eternal city and knew how to talk about historical facts in an interesting way, to garner the interest of children and adults for the art treasures and buildings of ancient Christianity. Books were another passion of hers and she loved enjoying nature. She was very sociable and maintained many friendly relationships. Conversations never ran dry and included a wide range of secular and religious topics.

Her slowly declining physical strength and finally her dependence on help in many respects were difficult to accept, especially when it became necessary for her to move to Coesfeld in 2015. The loving care in Kloster Annenthal and by her family with whom she had always felt closely connected supported and consoled her.

A quotation from Karl Rahner, which Sr. M. Josefinia chose for her memorial card, gives us an idea of her struggle with faith which also became obvious in her conversations:

Faith means bearing the incomprehensibility of God – all your life long.