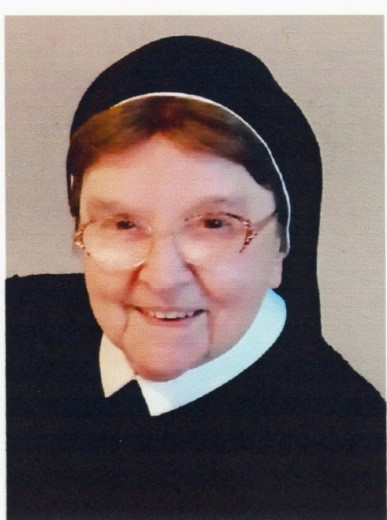 During her long life Sister Maria Juliane “sowed abundantly” through her many gifts and abilities. This became clear through the many contacts that were maintained with her: be it from the ladies and gentlemen from the schools in Coesfeld and Berlin, from the children and youth whom she prepared for the reception of First Communion and Confirmation, as well as the elderly who were regularly visited by her.

In her diary, the birthdays and name days of all the seniors from the parish and of all her co-sisters were recorded, and each one could count on a personalized congratulation. In the village she was considered the “chaplain of Mülhausen”.

As long as she thought it possible, she did all her visits and errands by bicycle. As with this, she was independent and self-determined until the last phase of her life. In her companionship during her last days, she herself decided on closeness and distance.

On the occasion of a visit by a co-sister, she expressed, “Don’t live to be 100!” And yet she gave the impression that she enjoyed life and was purposefully striving toward the completion of her 100th year. She was thinking along with how that big day might go. It turned out to be a beautiful day and Sister enjoyed it surrounded by her relatives and the people who were close to her. She was also happy and grateful that it was possible for her to visit her niece.

For months Sr. M. Juliane had been thinking that her remaining time to live would be short; she repeatedly tidied up and informed her local superior, Sr. M. Hadwigis, where she kept her important documents. When Sr. M. Hadwigis was on vacation two weeks ago, she was to be told by telephone that Sr. M. Juliane was “far up the ladder to heaven”.

Last Saturday (July 30th), Sister M. Juliane suffered a stroke. It was very difficult for this strong-willed woman to accept the limitations that came with it. Her niece and nephew were informed and took the opportunity to bid farewell to their aunt. On the morning of her last day, she seemed acquiescent and calm; her last breath was barely perceptible.

The word from the Gospel on the day of her burial, “…when the grain of wheat has died, it bears abundant fruit.” (cf. Jn 12:24) was now fulfilled in her.