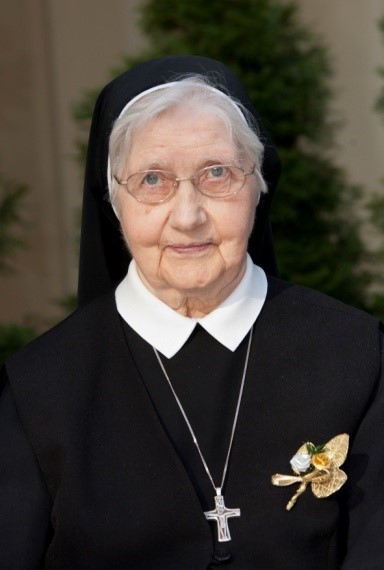 Maria was the third of the ten children born to Josef Richter and Rosa Richter, née Aumann. When Maria was three years old, the family moved to Kellerhöhe. There she attended the basic catholic primary and secondary school from 1933 to 1940. On 21 June1936, she received the first Holy Communion and a year later she was confirmed. After completing basic primary and secondary school, Maria helped on her parents’ farm for one year. Then she was a domestic helper in a family in Emstek for 3 years. After that, she worked again on her parents‘ farm. In 1947, she was an apprentice cook in Antoniushaus in Vechta for one year and there she came into closer contact with the Sisters of Notre Dame. Not much later, she entered our congregation in the then provincial center in Mülhausen.

At her investment, she received the name Sister Maria Justiniane. She took her first vows in Ahlen. From there she was sent to Gelsenkirchen where she did domestic work and where she was sent again after her final vows. In between, she lived for 2 years in the student hostel in Münster. Later, she liked to talk about the provisional life there and about the big bomb crater in the garden which they circled on the so-called “cow path“ when praying the rosary.

From Gelsenkirchen Sister Maria Justiniane was sent to Bocholt, where she was responsible for the white sewing among other tasks. In 1971, she also took her exam to become a state-certified housekeeper. From 1981-1988, she took care of the house and reception desk in Münster. After that, she worked as a housekeeper in the novitiate in Coesfeld for five years. From 1993 on, she was again responsible for the refectory and the sewing room at the students’ hostel in Münster until she moved to Kloster Annenthal in Coesfeld in 2011 because of health reasons.

The two Bible verses which Sister Maria Justiniane had chosen as her motto were realized in her life. Whoever lived with her could experience Christ. She was simply there for others, quite naturally, without being intrusive. She went her way humbly, confidently, contentedly, joyfully, and deeply believing. God was truly the strength of her life.

After she moved to Coesfeld, her dementia began slowly but continually. After a few years, sisters who had not seen her for some time were shocked when they realized that Sister Maria Justiniane did not recognize them anymore. Most recently, she spent her time in bed, little or not responsive at all. Whoever wanted to do her good went to her, talked to her, but received no response and usually no reaction at all. We do not know what was going on inside her and what she was able to perceive.

On December 27 at about 11 pm, Sister Maria Justiniane completed her earthly life; now she can completely be with Christ to whom she had dedicated all her life.