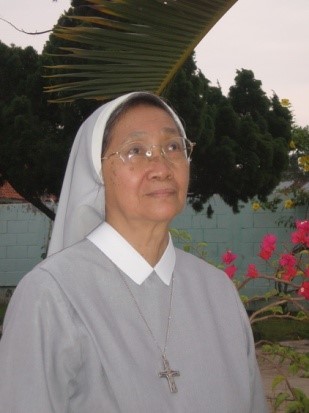 Sr. Maria Kresensia was born on October 29, 1940, under the name of Maria Silvia Irawati Liem Lok Tjie, familiarly called Irawati, as the sixth child of a family of Liem Hong Keng and Liauw Lwie Nio. They have 4 boys and 4 girls. Pemalang is the town where she grew up. Irawati was educated and raised in a Confucian family.

The love of Christ gave hope for her to become a Catholic through the sacrament of baptism on December 19, 1965, in the Station of St. Peter Pekalongan, Pemalang Parish, and on December 8, 1966, she received the Sacrament of Confirmation in Pekalongan.

Irawati’s young life after her middle school was filled with various courses of life-skills. They were auto mechanics, hair styling, typing, and tailoring courses. Her hobbies were playing basketball, swimming, and watching movies.

After watching a movie about the life of a nun, she desired to become one of them and she was introduced to the Sisters of Notre Dame. She finally decided to enter Notre Dame on May 16, 1966, as a postulant. Then she was invested on January 4, 1967, in Pekalongan and she received the religious name Sister Maria Kresensia.

After her first first vows on July 8, 1969, Sr. M. Kresensia was missioned to the sewing room to further develop her talents. Along with the growth of her spiritual and human life as a nun, she then made her perpetual vows as a Sister of Notre Dame on June 11, 1974.

Sister Maria Kresensia’s talent as a dressmaker was subperb. Besides sewing Sister also took charge in various household ministries. In addition to those, Sister also ministered at the motherhouse, Rome, as an adoration sister. Her spirit of leadership was dedicated to the service of the community when she was local superior at the provincial house.

Her retirement began in 2014, and she lived at our Wisma Hana retirement logde in Pekalongan in line with the declining health due to the brittleness of the bones. Devotion to Mary became a significant part of sister’s life in times of pain. Sister Kresensia’s quiet soul enabled her to bring freshness and joy during her illness and old age.

Her health declined since June 2015 and Sister Maria Kresensia united her suffering with the suffering of Mary and it finally ended at 3.00 p.m on Saturday, December 26, 2015. As sister was journeying home to God, she was accompanied by our Sisters.

May she rest in peace!