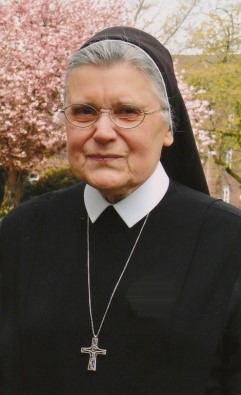 Ruth was the second child of the master carpenter Johann Skibowski and his wife Leokadia. The catholic region of Ermland, where Allenstein is located, marked the family in which Ruth and her elder brother enjoyed a happy childhood. Since her father died already in 1941, her mother and the two children needed the support of their relatives which was given in abundance.

Ruth attended the basic primary and secondary school in Allenstein and then an all girls middle school which she had to leave, however, without taking the final exams because the Russian front was approaching and the family had to flee towards the West. They found accommodation at an aunt’s house in Waitersmühl, County Heilsberg. Here the mother died so that the aunt and the uncle, a priest, took care of the two orphans.

When the Second World War came to an end in May 1945 and the Russian occupying power threatened the German population, especially the young women and the girls, Ruth and her relatives fled in an adventurous and dangerous way to Berlin in November 1945. Here she was taken ill with typhoid fever and remained behind alone in Berlin. After her recovery, she managed to get to Diebrock near Herford on a refugee transport. By the missing persons tracing service of the German Red Cross, the family was finally reunited in Lutten, County Vechta. At the Liebfrauenschule in Vechta, Ruth received her intermediate school certificate and she came into contact with the Sisters of Notre Dame. Ruth‘s deep faith and her confidence in God’s protection and help in all the dangerous situations she had experienced awoke in her the wish to serve God as a woman religious all her life.

At the age of 18, she started her postulancy in Mülhausen on January 30, 1948. At her investment, she asked for the name of her deceased mother. Sr. M. Leokadia attended the secondary school for women at the Liebfrauenschule in Mülhausen from which she graduated in 1953.

She then studied in Freiburg and Frankfurt. In 1959, she started her teaching career as a vocational school teacher at the vocational school in Ratingen, where she taught domestic science and crafts. In 1971, she was transferred to the training college in Mönchengladbach. There she ministered as director of studies until 1994 when she went into retirement.

Sr. M. Leokadia was a calm and patient teacher and colleague, who was always ready to help. It was obvious that she drew strength from her deep union with God and her life in communiy. Her cheerful nature, her love for singing and her readiness to help wherever help was needed marked her retirement and her service as local superior. After her retirement, Sr. M. Leokadia took care of the school library, she continued singing in the church choir and she served as a lector at St. Barbara parish in Mönchengladbach.

In 2013, when her strength was failing and she needed more care and repeatedly had to stay at the hospital because of a serious heart disease, she was transferred to our care center, Haus Salus, in Mülhausen. She consciously decided against heart surgery since she did not expect a long-term healing because of her old age. She was happy to celebrate her iron jubilee and quietly and contentedly accepted her illness and the infirmities of old age.

She always maintained close contacts with her brother’s family who lives in Hamburg, and she enjoyed being with them.

During her last days she often expressed the wish to be released from the burden of life and in the early morning of January 13, she gave her life back into the hands of our good God.

All who have known Sister M. Leokadia as a co-sister, teacher and colleague will gratefully remember her as a loving, friendly, and joyful sister.