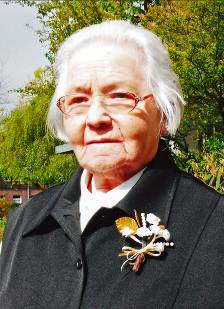 Sister Maria Leonia was born in Duisburg-Meiderich as the first child of Gottfried and Gertrud Figger. Together with three younger brothers and two sisters she spent a happy childhood in the Ruhr region which was thriving because of its coal and steel industry. On the one hand, this region was marked by hard work and political arguments and, on the other hand, by a strong union among Catholics resisting against communism and National Socialism.

From 1930 to 1938, Marianne attended the Catholic basic and secondary school and afterwards completed the then obligatory year of social service as a help in the housekeeping of her family. She learned typing and stenography and from 1939 to 1945, she worked as a secretary in the steelworks of the Klöckner AG in Duisburg.

Through the kindergarten, through her work with young people in the parish and through sewing and cookery courses, she got to know the sisters of Notre Dame at an early age and on January 31, 1947, she became a postulant in Mülhausen. Sister Maria Leonia was very skillful regarding domestic works, especially at sewing. That is why – after her profession and after ministering in a children’s home and in a kindergarten for a short time – she served as a seamstress in different houses. From 1954 to 1969, she did this work in the Generalate in Rome and in different houses of the Italian province.

In 1969, she returned to the provincial center in Mülhausen and worked in the administration of the Liebfrauenschule till 1997. After her retirement, she helped in the sewing room of Haus Salus, the home for our elderly sisters, until 2003 and from 2004 on, she also spent her twilight years there.

The contacts with her family were very important to her and she could vividly share her encounters with her siblings, nieces and nephews.

Sister Maria Leonia was determined, vigorous, and lively. These characteristics even marked her activities at a young age – during the time of National Socialism, when she risked her life typing the homilies of the Bishop of Münster, Bishop von Galen, with multiple copies during the night and then distributing them in the city together with other young people from the parishes.

Sister Maria Leonia was musically gifted, she learned to play the piano and the harmonium and had a well-sounding and supportive soprano voice, which she used with great enthusiasm to praise God and at celebrations and festivals. While in Mülhausen, she sang in three different choirs at the same time: in the sisters‘ choir, in the church choir of the parish, and in the choir of the parents, teachers and students of the Liebfrauenschule.

During the last years of her life, her physical afflictions became worse because of leukemia and strong allergic reactions and her liveliness gave way to a certain seclusion. Trusting in God’s help, she tried to live with the afflictions of old age and so to complete the last part of her long life.

On August 26, she was taken to the hospital in Kempen where God called her home to himself unexpectedly in the afternoon of 27th.

May God grant her his peace and fill her with the never ending praise of his eternal life.