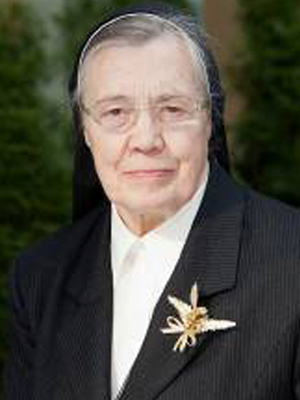 Sister Maria Libora, Margret Koch, was the oldest child born to the farmer and forwarding agent Bernhard Koch and his wife Maria. Together with three younger brothers and one sister she spent a carefree childhood in Schmallenberg in the Sauerland, which was marked by the Catholic faith.

When she was in her last year at basic primary and secondary school, her father died. Being the oldest child, she assisted her mother in taking care of her parental farm and of her younger siblings.

In 1952 she started an apprenticeship as a dressmaker in her home town, which she completed successfully. After a few years of work experience, she prepared for the master’s certificate as a dressmaker and in 1959 she successfully passed her examination in front of the Chamber of Commerce in Arnsberg. Then she ran the tailoring shop where she had been an apprentice for two years.

In 1962 she became an apprentice cook at House Saint Lioba in Bad Nauheim to improve her knowledge in housekeeping. Here she lived and worked for the first time with the Sisters of Notre Dame, whom she knew already through her cousin, Sister Maria Gertrudis.

Impelled by a deep and joyful piety, she felt attracted by the sisters and in 1963, she followed God’s call and entered the Congregation of the Sisters of Notre Dame in Mülhausen, where she began her religious formation. On entering the novitiate, she received the name Sister Maria Libora, placing her vocation under the protection of St. Liborius, the patron of her home diocese of Paderborn.

Throughout her religious life, Sister Maria Libora ministered as a master dressmaker. For 37 years, she lived and worked as needlework teacher, as group leader in the boarding school, and at times as sacristan at the vocational school of the Liebfrauenschule in Geldern. In 2004, she came to Mülhausen, where she ministered as dressmaker for our community and assisted in housework until a few weeks before her last stay in the hospital.

This is the outer frame of the life and work of our co-sister, but Sister Maria Libora’s personality includes much more than mere facts. She was a kind person, always helpful, patient and friendly. She listened attentively whenever co-sisters or students asked her for something and it was always hard for her when she was not able to fulfil a wish or request. She lived her religious life faithfully and quietly, she loved our community and was always ready to help. In her work, she was so correct and accurate that people said you could wear the clothes she had sown from both sides.

Sister Maria Libora was a good listener and she was able to share the joy of others, she was humorous and could tell interesting stories.

She maintained close contacts with her siblings and their families up to the third generation. She looked forward to home visits and to contacts through letters and phone calls. She also felt close to her former staff at the Liebfrauenschule in Geldern and to her former students whom she accompanied with her prayer and interest.

Since 2017, her strength declined rapidly because of cardiovascular diseases. On October 16, 2018, her right lower leg had to be amputated because of vascular occlusions, and on October 20, a massive pulmonary embolism led to her death. We believe that her unexpected death was a sign of God’s special love for Sister Maria Libora because she suffered very much from her increasing infirmity and need of help.

We are very grateful that Sister Maria Libora shared many years of her life with us and we will greatly miss her. In the firm belief that our good God will lead all suffering to a good end, we remember her in gratitude.