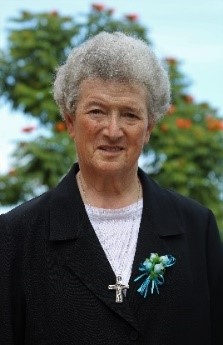 “Those who lead many to righteousness will shine in heaven like stars.” (Dan 12:3)

This verse from the Book of Daniel aptly applies to Sister Maria Líria. Her apostolic zeal and tireless dedication to education made her a brilliant star which will shine as an example to everyone who has been impacted by her life and ministry.

Blandina Stefanelo Libreloto was the seventh of 14 children born to Jorge and Cecília Stefanelo Libreloto. Both parents worked hard to provide a good education and a solid religious formation to their children which enabled them to be good Christians and valuable citizens.

Blandina met the Sisters of Notre Dame at the Santa Teresinha Parish School, Ibirubá, where she began her education. Later, she continued her studies at Colégio Notre Dame, Passo Fundo. In 1957, she entered the novitiate and received the name Sister Maria Líria which she used throughout her life. Sister had two blood sisters in our Congregation, Sister Maria Josema and Sister Maria Liliane, both deceased.

Always energetic and cheerful, Sister Maria Líria began her ministry as a high school teacher at the Escola Normal Maria Auxiliadora, Canoas. At the same time, she completed her studies at the Filosofia e Ciências Cristo Rei College, São Leopoldo, earning a degree in Neo-Latin languages as well as the license to teach Portuguese and French. Beginning in 1964, Sister taught Portuguese and French at various Notre Dame Schools in both northern and southern Brazil. Sister M. Líria loved her students and meticulously corrected their assignments, especially those relating to the Portuguese language. In addition, she loved to read, particularly French Literature, with an emphasis on Saint Julie´s letters.

Sister M. Líria also took advantage of numerous opportunities not only to keep abreast of new developments in education but also to deepen her own knowledge in other areas as well. She attended the theology course offered by the Instituto de Teologia e Ciências Religiosas, Porto Alegre, in order to enrich her pastoral work. In Passo Fundo, Sister was active in both prison and catechetical ministries. In other cities where she served later, Sister was engaged in the formation of the ministers of the Eucharist, in biblical formation for the parishioners, in the bereavement ministry and in the children pastoral. In the state of Acre, she also taught religious education classes in both parish and public schools.

Because of her need for assistance due to her fragile health condition, Sister M. Líria joined the Casa Betânia community in Não-Me-Toque in 2016, where she helped with the small tasks around the house. Willingly, she participated in community meetings, recreation and adoration of the Blessed Sacrament.

On Sunday morning, October 31, 2021, Sister Maria Líria was unexpectedly called home to her Lord, whom she had loved so much. May her joyfulness and willingness to serve be an inspiration and an example to her co-sisters. With Mary, the Mother of God, may she intercede for vocations for religious life.