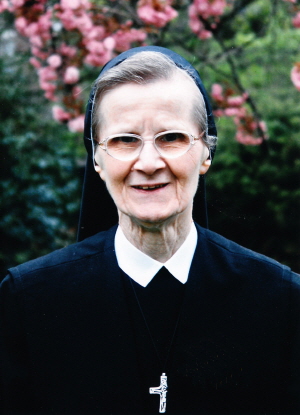 Sister Maria Ludgeri, Elisabeth Kloster, was born as the sixth child of the seven children of Theodor and Anna Kloster. Three of her six brothers died already as children. When she was three years old, her mother also died. Thus she got to know suffering in her family at a very early age. In 1930 her father married again, giving his four children a caring mother. One brother lost his life in Russia in 1941.

Elisabeth attended the Catholic primary and secondary school in Gescher. Then she did the compulsary year requested at that time, after that she completed a three-year formation in home economics. Instead of doing the labor service for women, she was assigned to work in the textile industry, which was important for the war. During the years after the Second World War, she worked as a housekeeper in large families and in the textile industry. From 1951 to 1952, she acquired further knowledge in home economics in the children’s home in Geldern-Baersdonk where she discovered her love for the work as a child care worker.

Here she also recognized her vocation for religious life. She answered God’s call by becoming a Sister of Notre Dame and on May 10 in 1952, she started her postulancy in Mülhausen. After her novitiate, she passed her exam as a child care worker and attended then the college for nursery teachers in Oedt. Sister Maria Ludgeri worked as an educator in different kindergartens, nursery homes and boarding schools, especially in the Ruhr Area. In 1984, she left her work as an educator and became in charge of the so called guesthouse in Mülhausen. When the elderly and sick sisters moved from the former infirmary into the new building, she became in charge of the cafeteria and in 2009, she herself moved to Haus Salus.

Sister Maria Ludgeri turned all her attention towards the people entrusted to her, whether children or guests, always trying to create a friendly and welcoming atmosphere. Cleanliness, tasteful decorations, especially flower arrangements, and an inviting ambience at meals were very important to her.

During her last years, however, she had to let go of her beloved work, which was often a painful process. For example, when housekeeping was restructured and services were reduced, her beloved guesthouse was closed and only used sporadically. Because of the restructuring of the Liebfrauenschule, the guesthouse was renovated and became an administration building of the Liebfrauenschule and thus part of the school. While serving in Haus Salus cafeteria until 2008, her strength was diminishing. It was not easy for her to accept that she had to give up this work because of her hearing and seeing impairments.

During her last years, she became more and more dependent on the help of her co-sisters and nurses because her physical and mental strength were diminishing. As far as her health allowed it, she participated in community life until the end.

Today, as we celebrate the feast of the Presentation of Mary, God called Sister Maria Ludgeri home to Himself. After having entertained so many guests all her life, she now participates in the heavenly banquet.