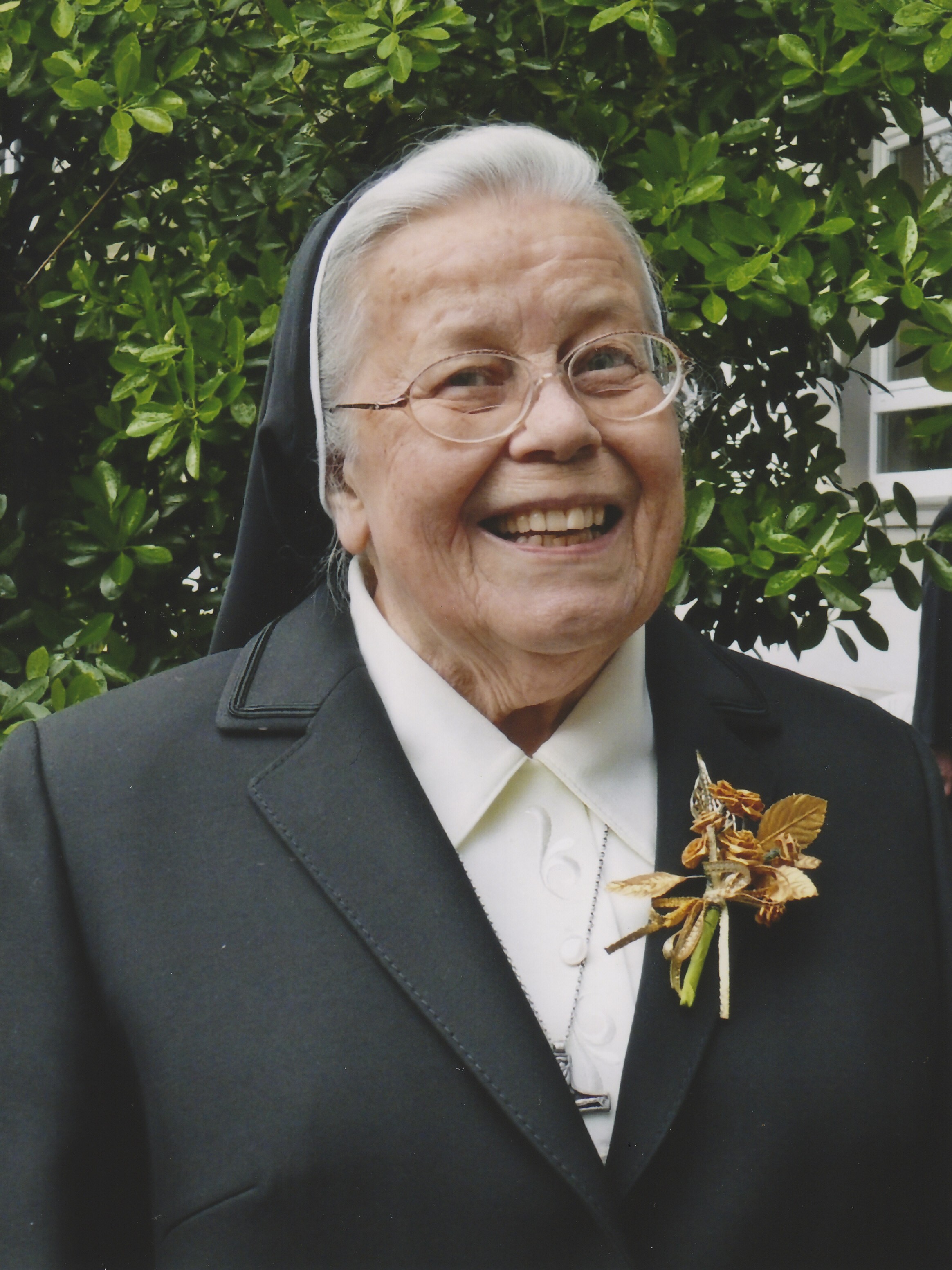 Gertrud Icks was the third of the five children born to Heinrich Icks, a locksmith, and his wife Hendrina. After completing the eight years at the Catholic basic primary and secondary school in her hometown Kleve on the Lower Rhine, she attended the domestic science school in Goch in 1944. But after only six months, she had to break off her schooling because most inhabitants of Kleve had to leave the town due to war events. The Icks family was evacuated to Wulferstedt (now County Börde in Saxony-Anhalt); there, Gertrud also spent her “mandatory year”. After returning to her hometown Kleve, she started an apprenticeship as seamstress in a master business in 1946 and completed it with a final examination in 1949. As usual at that time, Gertrud gained practical experiences as journeywoman in four other master businesses in Kleve und Krefeld.

During a trip to Rome, she came to know the Sisters of Notre Dame and wanted to enter immediately in Rome. But she was referred to the provincial center in Mülhausen, which was nearer to her hometown.

On 24th October 1955, Gertrud Gertrud started her way into our Congregation with her postulancy in Mülhausen, and at her investment on 3rd September 1956, she received the name Sister Maria Lutharde. After taking her first vows, Sister Maria Lutharde ministered from 1959 on in different places where the sisters offered so-called sewing schools. After a preparatory course at Meinwerk-Institute, Paderborn, she passed her master’s examination as a dressmaker at the Chamber of Commerce, Bielefeld, in February 1960. From 1960-1964, Sr.M.Lutharde prepared herself for the Higher School examination in evening classes in Kempen. During these years, she ministered in the sewing room at the provincial center. The original plan to train her as teacher at a vocational school was given up; sister was sent as missionary to Pekalongan, Indonesia. There, she ministered in different areas from 1965 – 1974. In addition to Dutch, which she knew already, she learnt the native language to be close to the people.

In 1974, the General Chapter elected her as an assistant general. She was in charge of the missions until 1986 and accompanied their fortunes from the motherhouse in Rome and on-site. From 1986 until 1993, Sr. M. Lutharde continued to live in the motherhouse and mainly ministered at the reception desk. After returning to Mülhausen, she became in charge of the sewing room at the then provincial center.

Since 2011, she spent her retirement at Haus Salus, where she enjoyed participating in all the programs. In spite of many health restrictions, she maintained her joy of life and her humor until the end. She experienced each day as a gift, was friendly towards nurses and co-sisters, and grateful for every sign of attention.

During the last months, there were difficult phases again and again, which she experienced and described as “waves“. She accepted very realistically that she had to take leave, but she also planned the celebration of her 90th birthday. She was able to celebrate this feast with her family in Haus Salus.

The nurses loved to take care of Sister M. Lutharde because she was uncomplicated, humorous, and courageous. She did not complain and clearly said what was good for her. Her comment was always “all right“. That was also her last word on the night before she died. Her passing away came as a surprise to all of us, but we know that now everything is “all right” for her!