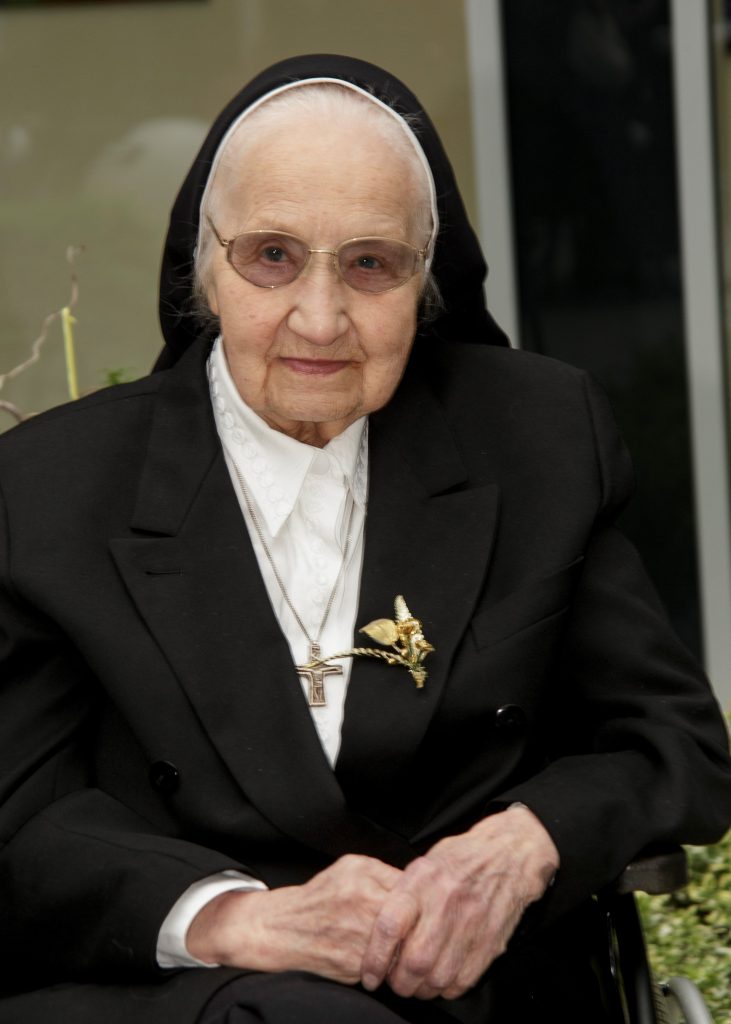 In the gospel of the liturgy of the day Sister Maria Luzia died, we heard Jesus say, “I am the way, and the truth, and the life”. (Jn 14: 6a). Sr. M. Luzia has gone this way and we believe that she now experiences the fullness of life.

Sr. M. Luzia grew up with her 5 siblings in a religious family. One brother was killed in the war. First, Agnes attended basic elementary and secondary school. Then she made an apprenticeship as a gardener, which she finished with an exam in 1951. After working in her profession for a few years, in 1955 she began training as a kindergarten teacher and after-school teacher at the women’s college – today a college for social pedagogy –, which she successfully completed. During that time, she also obtained the missio canonica.

In 1958, she entered the Congregation of the Sisters of Notre Dame. After her religious formation, she was sent as a help to the boarding school in Büren in 1962, where she simultaneously graduated from the local high school in 1965. From 1966 – 1971, she studied in Cologne where she received the diploma as a commercial teacher. As a trainee teacher she was in Münster and for half a year in Chardon, USA.

The next station was Ahlen, where she remained for 39 years: 24 years at our business school – 4 years as a teacher and 20 years as principal. After her retirement, she was active in the pastoral care for the elderly at the AWO center for elderly people for 15 years. She was local superior, she was on call at the nursing home, and she took care of the garden and the convent cemetery, where she could practice her first profession with great love and joy.

A co-sister reports the following about these 39 years in Ahlen: “We experienced her as multi- talented; fully involved in the management of the school, which demanded a lot of her love of freedom in terms of regimentation and deadlines. She found the necessary balance when she could be creatively active: in the garden, in the convent cemetery, by pottery, or by decorating the chapel. On Sundays, she devotedly took care of her orchids and then she went on a bike ride in the Vorhelmer forest. – She made a point of being in the community for prayer and other appointments. We appreciated her grounded piety and quick-witted humor. Being with her was never boring. We could laugh, argue, and discuss together. She was spontaneous and had many ideas. That could sometimes be challenging but it kept us alive.”

In 2015, Sr. M. Luzia came to Kloster Annenthal for her well-deserved retirement. For 4 years, she was in the infirmary. She remained true to her nature all her life. Everybody appreciated her sraightforwardness. When addressed or asked, she answered briefly, precisely, and aptly, usually in Low German. She looked at you, smiling, and after a short break she would answer briefly and clearly.

Now she has completed her life’s journey with HIM. May HE reward her with life in abundance.