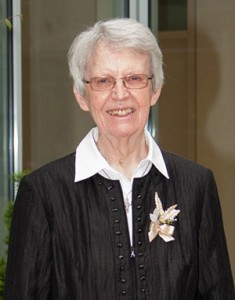 Together with her 11 siblings Sister Maria Magdalena, Irmgard Tepe, grew up in a vibrant and deeply religious family in Dinklage. In dealing with her brothers and sisters, she developed her own, sometimes a little austere character. She learnt to support others, to be unassuming, to feel responsible for others, but also to assert herself, to find her own way and to follow it.

After finishing basic primary and secondary school, she got to know domestic and pedagogical skills with the Sisters of Notre Dame at St. Antoniusstift in Damme. Later she became a boarder at our domestic science school in Coesfeld where she came into closer contact with our Congregation. In 1961, after graduating from business school in Coesfeld, she decided to enter the Congregation of the Sisters of Notre Dame.

After her initial formation she made her first vows in 1964 and ministered for several years in the administration of our province. For a short time she lived in our convent in Vreden, where she assisted in housekeeping and accounting. In Vreden she was also introduced to catechesis and to pastoral work with young people. In 1969, she made her final vows in Rome.

From 1972 to 1974, she became in charge of a group of children and young people at Vinzenzwerk Handorf, a catholic institution for public educational support. At that time all the homes for children and young people were in a process of restructuring. The traditional big groups of children or young people of the same age were divided into smaller units. Sr. M. Magdalena became actively engaged in this process and used her experiences during her formation from 1974-76 as a nursery teacher especially for maladjusted children. Back at Vinzenzwerk, she was responsibly committed to the further development of the new structure of the groups. It was especially important to her to find ways of better respecting and protecting the personalities of the children and to assure each of them love, care and promotion. Together with others she supported the concept of small, external groups. In the 1990s, she moved to a flat outside the home with two girls of different ages and provided family-like conditions for her two charges. The realization of this new concept was a kind of life work to which she was fully committed as a religious who had decided to be of service for others according to the example of Jesus.

Retired, Sr. M. Magdalene maintained a good relationship to her meanwhile grown-up protégés and in the convent in Handorf she was available to them and to all her former acquaintances. She was also actively involved in the parish, especially in work with the elderly. Besides maintaining good contact with her “daughters” she also had good relationships with her large family, sharing their joys, their worries, and their sorrows.

Instead of moving to our Kloster Annenthal – as it had been planned – Sr. M. Magdalena was called to her eternal home on September 19, 2014. With all those who were close to her we are sad that we have lost her so unexpectedly and without really taking leave from her. But for her it is good that she has been released from the serious consequences of her brain haemorrhage and that she has found her peace in God in whom she believed. We sisters and many others will remember her as a an authentic woman religious.