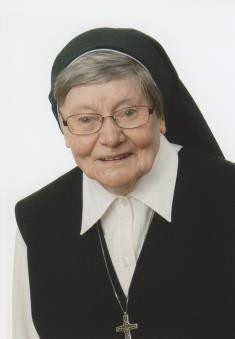 Maria Rensing was born into the large Catholic family of Anton Rensing and Margareta Lösing in Ammeloe, Ahaus County. As the eldest of seven children, she helped shape the mutually supportive working and living atmosphere on her parents’ farm. In good neighborly relations and in the nature surrounding her with plants and animals, her powers of mind and her gifts of the heart developed.

Three vocations to religious life emerged from this family: besides Sr. Maria Nicoleta, our co-sister Maria Margrita, who died of cancer in January 1979 at the age of 42, and Brother Ludwig, a Canisian, who is also afflicted by a difficult fate and who could not be here without the accompaniment and care of Brother Burkhard.

Sr. M. Nicoleta went to school during the difficult war and post-war period and graduated in 1953. In 1955 she received a qualification as an assistant cook. In July 1961, as a young sister, she obtained the Missio Canonica, and in 1970 she passed the examination as a nursing assistant in Berlin.

After her First Profession in 1962, she began her journey through several fields of work and many coonvents. She was employed in housekeeping and in the care of the elderly in Münster, Bocholt, Berlin, Büren, Coesfeld, Gescher, Warstein, Allagen and again Coesfeld. In Gelsenkirchen she ministered as the local superior.

These many transfers alone show that she was challenged to an inner freedom and steadfastness at the same time. Throughout her life she was eager to learn and, when it seemed necessary, defended her convictions of faith.

All the work and tasks assigned to her, which were certainly not always easy, Sr. Maria Nicoleta carried out quite naurally. She spared no work; more than that, she saw where small or larger services were needed, unobtrusive but indispensable for the functioning of a community. She lovingly cared for the people entrusted to her and the fellow sisters living with her. She had a fine sense for those in physical, mental and spiritual need. She always said yes with a ready heart, even though she was anxious by nature and therefore it was sometimes a hard won yes. She knew phases of melancholy, but she also experienced happy times throughout he span of her life. Always and everywhere she sought refuge in prayer. Her belief that she was called by grace was unshakable. And this certainty was expressed in her joy, confidence and deep, living faith. Her motto “Rejoice, we are God’s people, chosen by His grace” bears witness to this.

In 2007 Sister Maria Nicoleta came to Coesfeld and helped in the infirmary: unobtrusively and lovingly. She lent a hand where small and larger services were needed until her strength no longer permitted it. Becoming more and more in need of help herself, she was lovingly cared for by our nursing staff.

Sr. M. Nicoleta’s life became a simple being present and offering of service as she grew older and more mature. This was the mature fruit of her relationship with Christ and the grace of being called by God and written in His hand. We are confident that God has now become her everything.