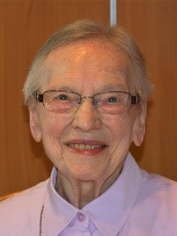 Sister Maria Nicolina was the fifth child born to Marinus Hendricus Hendriks and Johanna Maria Vereiken. When she was 10 years old, her mother died. Her elder sisters and her father took care of the family.

Sister Maria Nicolina spent her childhood together with her three sisters and her five brothers in Helmond. There she attended the elementary school of the Sisters of Notre Dame and was one of the first girls to join the Sinclair association. This was a flourishing association run by the Sisters, which promoted a lot of vocations for our Congregation. At the age of 20, Sister entered our Congregation.

After her profession, she ministered in different houses of the province, e.g. in Wessem, Arnhem, Maria Auxiliatrix and Milheeze.

When we think about her life and look at her ministries, we discover the caring for others as a kind of red thread: she took care of the guests in Arnhem, of elderly people in Wessem, and later of elderly priests in Maria Auxiliatrix. She did it in her own way, quietly and modestly. She was not a woman to come to the fore. That did not correspond to her character. But when she had something to say, she did it.

In the community in Milheeze, she exercised a significant influence in her own, quiet way.

In 2002, Sister Maria Nicolina came to Tegelen to enjoy her retirement age. Her professional life had come to an end. We and she herself, too, recognized that the candle of her life was burning down. She gave herself peacefully to God. Her vitality was admirable until the end. When we visited her, she was happy and listened to our stories; she answered in a humorous way, with a smile on her lips.

We bid farewell to her, grateful for the many wonderful years and the love and care with which she surrounded us and others in her life.