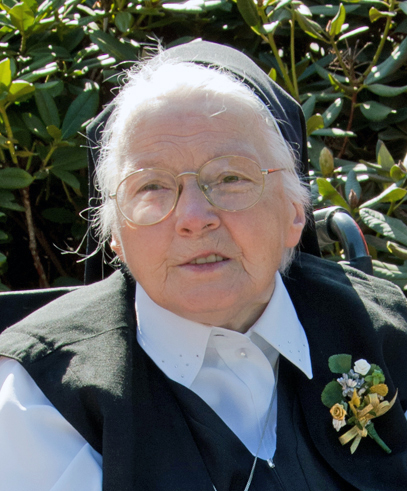 Sr. Maria Olivia, Maria Baalmann, daughter of the farmer Heinrich Baalmann and his wife Maria, born Gerdes, grew up with two brothers and a sister on her parents’ farm in Groß-Stavern, County Meppen on the river Ems. She was baptized in the parish church St. Michael. Later she also received her first communion and the sacrament of confirmation in the same church.

In her curriculum vitae, she stresses that it had been very important to her parents to teach their children to become “real Catholics“. That meant for example to assume little duties in the house and to help with the work.

From 1941-46, Maria Baalmann worked on her parents’ farm. She remembered that life in her family had been determined by her mother’s guiding principle “pray and work”. Encouraged by a friend who became a nun, Maria also felt a growing attraction to religious life. According to her own saying, that corresponded to her “childlike, devout heart“ and to her hope of becoming happy in a life closely connected with God. Since she was still a little unsure regarding her vocation, her parents advised her to attend a cookery course with the Sisters of Notre Dame in Kempen on the Lower Rhine, which she completed very successfully. During that time, her vocation became more obvious so that she entered the Congregation of the Sisters of Notre Dame in Mülhausen in 1949 to start her religious formation with the novitiate. In 1956, she took her final vows in our Congregation.

During her religous life, Sr. M. Olivia was mainly committed to practical work, to the care of the children in our homes and to the elderly. For many years, she looked after children and young people in various homes, boarding schools and student hostels. From 1970 – 1996, she took care of elderly women at Marienstift in Gescher.
Even after her official retirement, she continued ministering there as long as her physical strength allowed it. In 2005, at the age of 79, with her strength failing and Marienstift being reorganized, she moved to our community of elderly sisters here in Kloster Annenthal.

By her simple devoutness and her true faith, Sr. M. Olivia has supported and enriched our life in community and our ministry. Her loving and friendly readiness to help was and inspiration for us even when she could no longer be active herself but had to accept the help of others.

On September 6, 2013, she went home to our good God to whom she has been so faithful all her life. We are grateful for her life and for her witness.