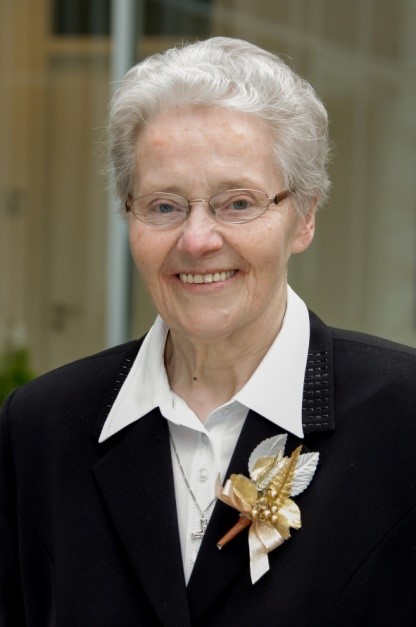 „No one other than the good God can shape us.“

Sister Maria Otmara was the 6th of 10 children of the married couple Elisabeth and Heinrich Helmer. From 1945 to 1953 she attended elementary school in Ellewick and then helped in her parental home. From 1956 to 1958 she did her theoretical and practical household apprenticeship in St. Michael in Ahlen with the Sisters of Notre Dame. Afterwards she worked as a housekeeper in a business household for 2 years.

In 1960 she entered the Sisters of Notre Dame in Coesfeld. In the last year of her novitiate formation she was already working in Nottuln as a helper in the boarding school and in home economics classes in the school. After making her vows, she continued her work in Nottuln. In 1966 and 67 she helped in Bocholt in the residential home for women workers. Afterwards she went to Rome for preparation for her perpetual vows, which she professed there on February 25, 1968.

From 1968 to 1969 she attended the technical school for businesswomen in Geldern. From there she went back to Nottuln as head of a group in the boarding school. In Bocholt and also in Nottuln she attended various advanced training courses in addition to her work. In 1974, she was able to take over the management of the kitchen in Ahlen, which included the training of apprentices and the supervision of interns. From 1979, she worked in Büren as a group leader and, for a time, as a boarding school director. She then went to Bocholt for 15 years and worked in the kitchen and in the house. In 2000, she moved to the Liebfrauenstift in Münster. There she was in charge of the dormitory for female students and for the first 6 years was at the same time the local coordinator. When the work in the dormitory became too difficult for her, she came to Nottuln for various services in the house. For 6 years she was the local superior also there.

Last fall, she fell with her bicycle and was hospitalized in Coesfeld. A complicated leg fracture caused her great problems. She therefore transferred from the hospital to the infirmary in Kloster Annenthal. When she became more independent, she decided to stay there in the senior center, because she still needed help. On June 11, 2022, she was taken to the hospital after falling and also having problems with speaking. A great hardship for her was that she could no longer walk. Therefore, she also talked about preferring to die. But no one was under the impression that this would happen so soon. On the night of June 25, she was found dead in bed at the hospital, a surprise to all of us.

Sister Maria Otmara especially loved working with children and young people. With much pedagogical skill, knowledge of human nature, love, and respect she met them and had an open ear for all their concerns.

As words that accompanied her, she chose: “No one other than the good God can shape us.” The deep conviction that God was always by her side accompanied her throughout her life. Now she is experiencing completion through the good God.