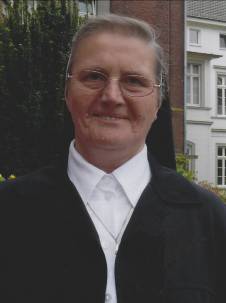 Marianne was the eldest daughter born to Josef and Maria Laux, born Lönards; her only sister Helga is two years younger. Her small home town Ernst is situated on the River Mosel and surrounded by vineyards. Like many others in the area, Marianne’s parents were wine-growers. From 1942 to 1951, Marianne attended the basic primary and secondary school in her home town. Because of her father’s untimely death, she needed to assist her mother in securing their livelihood. In addition, Mrs. Laux ran a small guest house for holidaymakers. After completing school, Marianne spent all her energy on her parental enterprise, which meant hard physical work.

To develop her domestic skills, she became an assistant cook at Heinrich-House in Engers; there she came into contact with the Sisters of Notre Dame and her wish came up to enter religious life herself. On  October 6, 1956, she entered our congregation; at her investment on April 23, 1957, she received the name Sister Maria Philomene.

Sr. M. Philomene had always been in charge of domestic work and of the laundry, which she did with great reliability and accuracy in Mülhausen, Cologne, and for 44 years in St. Tönis. Here she was also in charge of the chapel and the laundry of the parish church. Marienheim in St. Tönis was her home; the house with the adjacent kindergarten was a meeting place for all kinds of groups in the parish, and cookery and sowing courses were offered as well. Her marked sense of tidiness saw to it that all the rooms and “corners” were always in best order. In a friendly but clear way, she expected the same sense of order of those who used the rooms.

She was present everywhere in the house; whenever she went on retreat or on holiday, people became aware of what she did quite naturally. Sister M. Philomene always maintained good relationships with the employees. She opened the door for many people and met each of them with friendliness and willingness to help.

She was modest and unassuming. She could listen to others but she also had a good sense of humor and loved company.

From 1998 on, Sr. M. Philomene often joined the annual pilgrimage of the St. Matthew-Brotherhood to the tomb of the Apostle Matthew in Trier. They walked for three days; this time was very important to her. No stretch of the way was too tiring for her; she was a beloved and esteemed co-pilgrim in the group.

When the community in St. Tönis was closed, Sr. M. Philomene came to the convent in Mülhausen on August 01, 2008, where she assisted in the housework, in the kitchen, and in the laundry. She could not say “no” even if she had to overtax herself. Until she fell ill, she assisted in the cafeteria in Haus Salus in the afternoon and she lovingly took care of sisters and visitors. – Feeling her physical strength failing, she asked in spring 2015 to be transferred to Haus Salus. Here she enjoyed being cared for as well as her beautiful room, which she proudly showed to all her visitors. Here she could really relax. She often said, “I feel like being in a hotel“.

On her 80th birthday, her relatives had invited her to their home, where they had prepared a wonderful birthday celebration for her, which she held in loving memory. Sometime later, she fell and a cerebral hemorrhage was diagnosed. Since then she was changing noticeably and her strength was failing rapidly.

The good God released her from her suffering in the evening of October 19 and opened the door for her to her eternal dwelling.