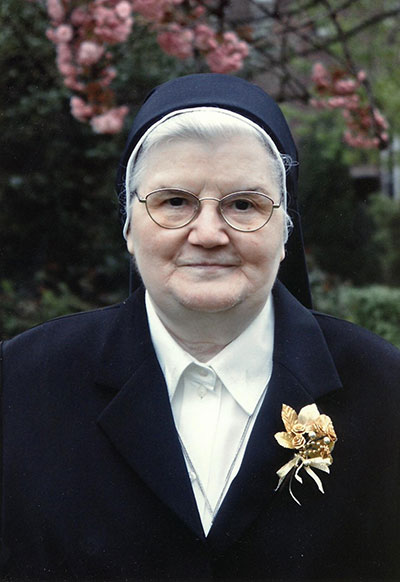 Anna Lucks was born to Hermann and Gesina Lucks on October 24, 1928, in Werpeloh, Emsland, as the fourth of five children. In her local town, she attended primary school until she was ten years old. Then she continued her education at a middle school.

On her parental farm, she helped with the manifold work on the farm and in the house. In 1948/49, she had the opportunity to broaden her domestic skills and knowledge by serving first in a teacher’s family in Wippingen and a year later in the children’s home in Wachtendonk which was run by the Sisters of Notre Dame.

Her experiences during these years helped Anna in her commitment on her parental farm.

Her collaboration with the sisters in Wachtendonk probably promoted her vocation to dedicate all her life to Jesus Christ by entering our Congregation. On July 16 in 1952, she entered the Congregation of the Sisters of Notre Dame in Mülhausen. A year later she was invested and received the name Sister Maria Bernalda, which was later changed at her request to Sister Maria Rafaele. On April 13, 1955, she made her first profession.

As a junior, Sister Maria Rafaele was transferred for three years to the Vinzenzheim in Aachen. In that great institution, she worked with the sister in charge of the kitchen for the well-being of the handicapped children and young people as well as for the patients of the clinic.

In 1958, Sister Maria Rafaele was sent to the motherhouse in Rome. There she also helped with the manifold work in the kitchen.

This service was restricted in 1966, when she joined the apostolate of perpetual adoration for the further time of her life. For 38 years, she faithfully dedicated herself to the apostolate of prayer on behalf of all the sisters serving in different ministries all over the world. Praying and interceding she presented all the requests in her simple devoutness to God. She was happy and grateful to live at the center of the Church, thus experiencing the universality and the unity of the catholic faith from close up.

Also from a distance, Sister Maria Rafaele maintained a close contact with her family in the Emsland.

When she was no longer strong enough for day and night hours of adoration, she returned to Germany in 2004 and has lived here in the new Haus Salus ever since; she lived a reclusive life while participating in the apostolate of adoration.

After a longer illness, but unexpectedly for us, God called her home on Sunday night, May 25, 2014.

We believe that the life of Sister Maria Rafaele is now fulfilled in the love of the risen Lord. We are thankful for her being with us and her witness of faith.