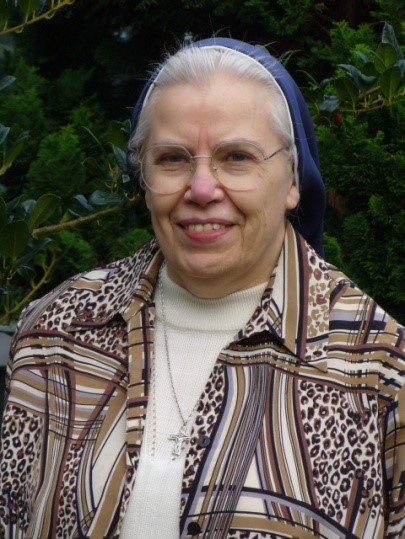 Sister Maria Reginfried, Lucia Borgmann, was the daughter of Anton Borgmann and his wife Thekla, née Pohlabeln, who were farmers. Together with her five siblings, Lucia enjoyed a well-protected childhood.

After completing basic elementary and secondary school in 1954, she first worked on her parental farm. During her childhood and youth, her weak health became already obvious. In order to attend middle school, she moved to her uncle who was a priest in Schapen, County Lingen. There she also attended a private school of economics from 1956 to 1958. In Coesfeld, she then attended a school for home economics for one year and a college for kindergarten teachers for two years. At Easter 1961, Lucia completed this formation. She returned to her parental farm only for a short time because on 27th May 1961, she started her postulancy at the Liebfrauenburg in Coesfeld, the then provincial center. On 3rd March 1962, Lucia was invested and received her religious name Sister Maria Reginfried.

After her first profession, Sister Maria Reginfried ministered in various nursery schools in our province, e.g. in Bocholt, Gelsenkirchen, Nottuln, and Ramsdorf. From 1970 -1973, she was the director of our children’s home in Marienbrink. Her weak health became obvious again and again. A congenital weakness of her lungs and the deformation of her spine forced her to stay in hospitals again and again and to have long resting periods.

In 1973, Sr. Maria Reginfried moved to Nottuln. She found her new ministry in the secretary’s office at our middle school. She benefited from what she had learned at the college for economics. She quickly learned how to do the work. She did the accounting conscientiously and she worked on the teachers’ salaries. For decades, she had been the right hand of the school leadership. She watched the development of the school with great interest and felt closely connected to the school community.

Growing flowers was her beloved hobby, she had the “green thumb.”

In the course of time, her difficulty in breathing increased. She needed an oxygen apparatus to be able to live and work. In the summer of 2017, she took leave of the school with a heavy heart and moved to Kloster Annenthal, Coesfeld. After a certain phase of settling in, she needed constant oxygen supply. Our collaborators looked after Sister Maria Reginfried with loving care. Especially Sister Kerstin Maria supported her by her presence and by giving her much love and attention.

In the early afternoon of 15th May 2019, Sister Maria Reginfried calmly passed away. Together with her we pray from psalm 23, “Surely goodness and mercy shall follow me all the days of my life: and I will dwell in the house of the Lord for ever”.

We firmly believe that Sister Maria Reginfried has now returned to God, our Father.