“Lord, beginning and end, be everything put into your hand.” Eduard Mörike 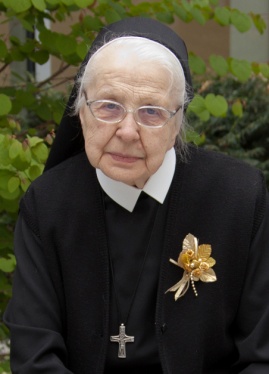 Sister Maria Reinilda, Elisabeth Nordmann, was born as the fifth of 10 children in Essen-Bevern, County Cloppenburg. She grew up in a deeply Christian family – one brother became a priest. After completing the basic primary and secondary school, she spent her mandatory year of service on her aunt’s farm where she could help until 1944. From 1944 – 1945, she was at the Liebfrauenhaus Vechta to learn housekeeping.

Impressed with the encounters with her aunt – Sister Maria Adelaidis – and two of her cousins – Sister Maria Ermelia and Sister Maria Gisela Vaske, who were Sisters of Notre Dame and who went to Brazil as missionaries, she felt at an early age that she also wanted to go there. In Vechta she decided to follow the Lord’s call and in 1945, she asked for admission into the congregation in Mülhausen/Lower Rhine.

After her religious formation, Sister Maria Reinilda attended the Seminar for kindergarten teachers and caregivers in Mülhausen. Later she received further formation as a youth educator and as manager of facilities for senior citizens. Thus, she was qualified to work in different ways with children, with young adults and with the elderly.

For 33 years, Sister Maria Reinilda was in positions of responsibility as local superior in various communities and as provincial assistant. She embraced these tasks with commitment, discipline and a high sense of duty. The well-being of the Sisters and the positive development of the province in the context of the society as well as the Church and religious life were very important to her.

After she was allowed to pass on the leadership responsibility, she assumed different tasks in Kloster Annenthal according to her strength. She looked especially after her elderly co-sisters, sharing the joys and sorrows of their everyday life. She could listen well and prayed much.

In December 2014, Sister Maria Reinilda fell seriously ill. That changed her life. Having lived a self-determined life for many years, it was not easy for her to gradually become more and more dependent on help.

Everything was done to give Sister Maria Reinilda the necessary nursing care and emotional care on her journey. All tried their best to fulfill her wishes and needs in order to make this time of illness and of leave-taking easier for her.