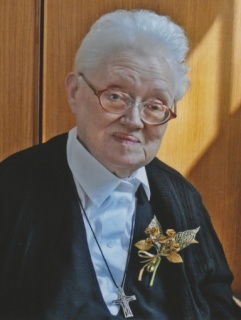 Sister M. Seraphia was the oldest child of Leonhard and Maria Heck. She and her six younger siblings spent a happy childhood and youth marked by the catholic environment of the northern Eifel near the Belgian border.

Johanna attended the catholic basic primary and secondary school in Roetgen and after finishing the mandatory year for girls prescribed by the Third Reich, she continued her formation at a school for home economics in Aachen. In Aachen, she also started her training as a children’s nurse, which she completed successfully.

From 1944 on, Roetgen was in the middle of the battle zone of American and German squads. A great number of soldiers died and the civilian population had to leave their homes. After the war, they returned to their completely destroyed villages and forests. Because of that situation, Johanna could only finish her probationary year as a child care worker in 1946. She worked in this job in different families until 1954. Her wish to become a pediatric nurse could not be fulfilled because during the post-war years everybody’s energy was needed for reconstruction work.

From 1954 on, Johanna worked in the children’s home Maria Helferin in Leuth where she came to know the Sisters of Notre Dame. Her wish to offer all her life to God became stronger and stronger, so that she entered the congregation of the Sisters of Notre Dame in Mülhausen on October 15, 1955. After her religious formation, Sr. M. Seraphia ministered in different children’s homes in Duisburg-Ruhrort and Kempen and in the sanatorium Maria Helferin. She loved the children and the children loved the small sister who was always there for them.

Unfortunately, she could only work for a short time in this ministry because in 1974, she was diagnosed with multiple sclerosis which gradually led from an initial difficulty in walking to complete paralysis. She was transferred to Haus Salus in Mülhausen, where she still assisted at the reception desk in a wheelchair for four years.

From 1978 on, Sr. M. Seraphia became more and more in need of care. During the last five years, she could not leave her bed any more. She was not able to move or to speak.

Sister M. Seraphia was an open-minded sister. As long as she was able to she liked reading, she enjoyed participating in community prayers and community life.She was happy to participate via TV in the Eucharist and in the prayers of the liturgy of the hours in the chapel and she loved watching other interesting programs.

Sr. M. Seraphia was very grateful for the good care and kindness of the geriatric nurses and co-sisters and rewarded them by her gentleness, patience and contented smile.

She always maintained a close contact to her family.When she could no longer get in touch with them, her relatives visited her regularly.

On the morning of September 17, our good God ended her long suffering by calling her gently home where she now enjoys the fullness of life in His eternal embrace.