We await a Saviour, the Lord Jesus Christ,
who will change our lowly body to be like his glorious body.
Phil 3: 20-21 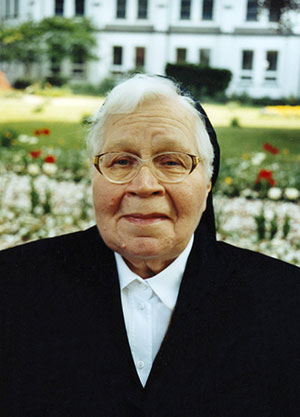 Sister Maria Siegfrieda, Anna Röhling, was born in Kirchhellen as the youngest of the five children of Heinrich and Mechtilde Röhling. Her father was a self-employed plumber and heating engineer, and so the children grew up in a big household with apprentices and workers who had completed their apprenticeship and they learnt at an early age to help with the housework and in their father’s company.

Anna attended the basic primary and secondary school in Kirchhellen and then she helped her mother with the housework. At the same time, she attended the agricultural vocational school. But she could not finish it because of violent bombing and the turmoil of the war.

After completing her mandatory year of service – stipulated by the National Socialists – in a civil servant‘s household in Kirchhellen, she took over the housework from her sick mother and regularly accompanied her blind sister to her job.

In Duisburg-Speldorf and at Vinzenzheim in Aachen, Anna completed her skills in housekeeping and there she also met the Sisters of Notre Dame. She felt so strongly attracted by the sisters‘ way of life and by their commitment to the elderly and handicapped that she also felt called by Christ to follow him as a Sister of Notre Dame and on August 15, she started her religious formation in Mülhausen.

After ministering in the kitchens of different convents and after completing her formation in housekeeping in Geldern, Sister Maria Siegfrieda was transferred to Vossenack in 1967, where she ran the kitchen at the Geschwister-Louis-Haus, a residence for senior citizens, until 1984. Preparing the daily meals for the residents, sisters, and guests, she gave great importance to healthy and diverse nutrition. She especially tried to teach her apprentices good and solid knowledge and to promote them in every possible way. For many years, she was a member of the examination board at the vocational school in Düren during the examinations of the home economics classes.

From 1984 until the closing of Haus Cäcilia in Bonn in 1997, Sister Maria Siegfrieda was also in charge of the kitchen there before moving to Haus Maria Einsiedeln in Bonn, where she assisted in the main kitchen according to her physical capacity.

In 2007, she was transferred to Haus Salus in Mülhausen because of cardiac insufficiency and other signs of old age. Sister M. Siegfrieda was sociable and open-minded, she loved the activities offered by the Social Service and by the sisters and when the weather was nice, she enjoyed walking in the park around Haus Salus and the convent. She had always maintained close contacts with her family and she spent her vacation with her blind sister until her sister died.

In the early morning of December 13, 2014, God very unexpectedly offered her the fulfillment of her hope for her Saviour, our Lord Jesus Christ, who will change her lowly body to be like his glorious body, as we are promised in Phil 3:20-21.