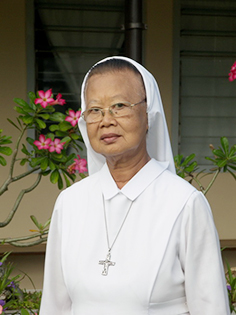 Sri Seneng Prihatin was born to Slamet Widodosewoko and his wife Mujirah in Surakarta. She was the third child of three siblings. Due to the social and political situation the family moved to Ambarawa and lived with a good Christian family where Sri Seneng Prihatin grew up and was baptized in December, 1953, receiving Florentina as her baptismal name. In the following year, on September 3, 1954, she received the Sacrament of Confirmation.

In 1957 the voice of God touched her heart very deeply, so that she could not resist, and she asked the Superior in Pekalongan to accept her as a postulant in the Congregation of the Sisters of Notre Dame. On October 30, 1958, Florentina was invested and received the religious name Sister Maria Tadea. She made her first profession on January 4, 1961 and she started her juniorate with the assignment of taking care of the household in St. Teresia Community in Rembang. Her religious formation helped her to become a mature religious, and she was admitted to final profession. She made her final vows on January 3, 1967. On January 1, 2011, she celebrated her Golden Jubilee.

As a young sister, Sr. Maria Tadea was someone who cared for the cleanliness and beauty of the nature. She had learned this in her family. Therefore Sister always had the task to take care of the household, especially when the Sisters opened new houses. She kept the garden lovely and the surroundings tidy. She loved the community in her own way, and always participated in community prayers and meetings. In addition to serving the sisters in the community she served outside the community by visiting families, the sick – in hospitals or at home, the dying, and people in adversities. The verse from the letter of St. Paul to the Thessalonians sums up the life of dear Sister Maria Tadea. She also participated in Church activities: weekly charismatic prayer, St. Monica, Catholic Women’s League. Moreover, Sister was active in women’s gatherings in the neighborhood.

The life experience which she would not forget was participating the Congregational Pilgrimage in 2003. She wrote down all that she experienced during her visits to the historical places of the Congregation and the Church. She was so grateful to the Congregation for the opportunity that she recorded everything in great detail and shared it with the Sisters.

Sister Maria Tadea’s health declined since April 7, 2018. She had always prayed that if God wanted her “to go home” and she needed to be admitted to the hospital she would ask Him only for three days since she did not want to bother other people in the last days of her life. Her desire was granted by God. She was in the ICU for three days, received the sacrament of the sick, and passed away on April 10, 2018. We miss her presence but we believe that she will continue to pray for each of us. May she rest in peace with the Lord.