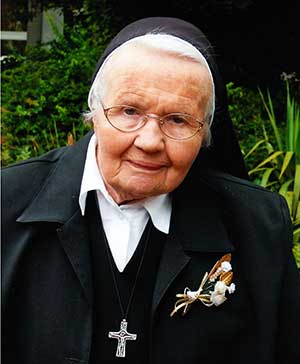 Sister Maria Theodorika, Mathilde Stöck, was the second of the three children of Theodor Stöck and Therese, born Funke. She had a sister and a brother, who was killed in the war in 1943.

After attending the basic primary school for four years, she went to Notre Dame High School in Ratingen. In a family in Ratingen, she completed the obligatory year of service introduced by the National Socialists in 1938.

In Düsseldorf, Mathilde was trained as a dental nurse and gained a lot of experience at a West German clinic for oral surgery. After her apprenticeship, she had to give up her first and her second job already after two or rather three months because the dentists were drafted into the army and their offices were closed. The office where she then worked was kept going by ever new dentists because one after the other was drafted into the army.

On September 7, 1948, she entered the Congregation of the Sisters of Notre Dame in Mülhausen. During the first years after her profession, Sister Maria Theodorika ministered in different communities in Bonn and Geldern. After her final vows in 1956, she worked for 16 years as a dental nurse in the office installed in Haus Salus for the dentist, Sr. M. Humilitas. In 1972, when the office had to be closed because Sr. M. Humilitas fell sick, Sister Maria Theodorika was sent to assist Sr. M. Julia, who was in charge of the boarding school. She looked after the eldest students, the so-called St. Mary’s group. In 1978, she ministered for some years at the main entrance where she was also in charge of the switchboard. Then she served for 10 years in a ward in Haus Salus, the home for our elderly sisters, before she retired in 2003.

During her service at the boarding school, Sister Maria Theodorika had established good contacts to the students who remained faithful to her until her death. As long as she was able to she wrote circulars, telling the former students about Mülhausen. We are sure that it is mainly thanks to her that we have good contacts to a great number of our former students. She had looked after her former collaborator, Sr. M. Julia, until she died at the age of almost a hundred years.

Sister Maria Theodorika has always been ready for duty, she was exact and meticulous. In Düsseldorf she participated for days in the construction of a newly built kindergarten that was to be opened, helping with the hardest work, and could still laugh when the hardly finished work was partly destroyed again by the craftsmen. She had a schedule with fixed times for prayer; she loved reading interesting books and watching a detective film now and then. After a stroke a year ago, she could not walk anymore and was dependent on a wheelchair. As special joy for her were the visits of Mrs. Tilmanns, a former student, who often drove her around the garden. Sister Maria Theodorika was grateful for any kind of help given by the nurses.

After a further stroke, she was no longer able to talk. The sisters kept watch over her. On October 11, 2013, our Lord God called Sister Maria Theodorika into his kingdom of light and peace.