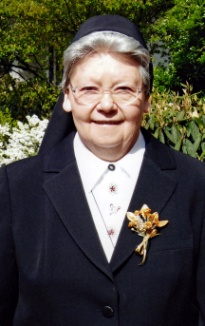 Margret and her four siblings grew up on the farm of their parents Karl and Theodora Storm. In spite of the turmoil of the Second World War, they felt protected and carried by their deep roots in faith. From 1938 to 1946, Margret attended the basic primary and secondary school in Varenrode and then a training course at St. Georgsstift in Thuine, a care center run by a Franciscan congregation. After that she was trained as a dressmaker and passed her final exam in September 1951. In the following years she completed her professional skills and then she helped her parents on their farm.

At the end of October 1957, she entered the Congregation of the Sisters of Notre Dame in Mülhausen and at her investment she received her mother’s name in a slightly modified form. After her novitiate and temporary assignments to various sewing schools, she passed the master’s examination as a dressmaker in Paderborn in March 1964. From then on she was in charge of the apprentices at the children’s home St. Josef in Wachtendonk and she gave courses in needlework in St. Tönis.

In 1970, it became obvious that Sister Maria Theodorine suffered from a severe mental illness with depressive phases and anxieties which changed our friendly and outgoing sister so much that she had to give up her beloved work with the youth and at the sewing school. In the sewing room at the provincial center in Mülhausen, she found a new ministry and understanding co-sisters and there she served from 1971 to 2003. Sister Maria Theodorine was very accurate and reliable in her ministry, she did her work in a calm and friendly way, she loved living in our community and she was understanding and ready to help. She also assisted in the sacristy, with the laundry and in the refectory.

She drew strength from silent prayer and was carried by the communal prayers and by the Eucharist. Due to many years of treatment with psychiatric drugs, she became slower and slower and every change in the daily routine was felt as a burden. On the other hand, she could be very sociable, she could laugh heartily and give fitting answers. When she was asked to dance on special occasions such as carnival, all the burdens were lifted from her heart and her movements showed rhythm and harmony. She felt carried by the community of her sisters who helped her to accept and bear her disease.

When her physical strength also began to fail and she became dependent on nursing care, she moved to the infirmary in September 2011. She was grateful for the help she received and she happily welcomed visitors. Several times a year a sister accompanied her to her family for a day visit and likewise the family came to visit her in the infirmary. Thanks to the telephone she could maintain an intensive contact with her family and they could exchange the latest news in their home dialect.

After several short hospital stays during the past months, Sister Maria Theodorine was diagnosed with pancreatic cancer which was non-operable and which had already infected the neighboring organs. In her living will she had decided to renounce life-extending measures and she reaffirmed this in the presence of the treating physician and a co-sister.

During the last weeks she bore her pain and her sickness with great patience and she entrusted herself to her co-sisters and her nurses.

In the afternoon of 28 May 2016, she phoned her sister in spite of her great weakness and in the evening of the same day she gave her life and her suffering back into the hands of our good God. After she had passed away, she radiated great peace; she had found in God what she had been longing for all her life: light, joy and eternal security.