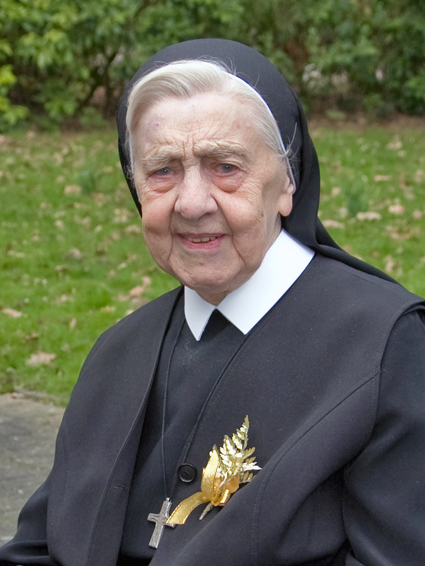 Sister Maria Theodosa Block, Elisabeth Block, was the eldest among the eight children of her parents, the farmer Hermann Block and his wife Josefine Block, born Beeken. She was baptized in the parish church St. Cäcilia in Bösel. There she also received her first communion and the sacrament of confirmation.

In 1936, after finishing primary and secondary school in Bösel, she stayed in her parental home. She assisted her mother and looked after her younger siblings, including the newborn, youngest child. Two of her sisters died at an early age and a brother was killed in Russia during the war.

From 1946 to 1947, she spent a year with the Sisters of Notre Dame in Oldenburg in order to learn all the necessary skills to run a household.

In 1948, she entered the novitiate of the Sisters of Notre Dame in Mülhausen. During her novitiate and after her first profession, she ministered in children’s homes. After her tertiate and her final profession in Rome in 1955, she ministered – sometimes as principal – in nursery homes and children’s homes in Cloppenburg, Coesfeld, Marl, Vreden, and Gescher. Since resources were very scarce in child care institutions run by the state or by Caritas during the fifties and sixties, Sister M. Theodosa often had to gather all her engergies to take care of the children.

From 1974 – 1976, she looked after her sick co-sisters in the infirmary of the provincial center in Coesfeld.

In 1976, the congregation allowed her to take care of her sick mother in Bösel. During that time her brother, who was the owner of the parental farm, died. After her mother’s death in 1982 she returned to the community. She looked after the elderly and helped with the housekeeping at Marienstift in Gescher. After the reorganization of this care center in 1996, she continued doing voluntary work there. In 2006, she moved to Kloster Annenthal, our health care center.

Sister M. Theodosa was a rather discreet and unobtrusive sister who did her work without any fuss in a calm way. On the occasion of her diamond jubilee, 60 years after her profession, the parish in Gescher wrote about her work in the kindergarten that she was very committed and after ministering in the kindergarten, she tenderly looked after the elderly in the Marienstift. In 1996, the closure of Marienstift ended her working contract there. As a retired sister she could only do voluntary work, which was very hard for her. Her transfer to Annenthal was another hard step for her. Though often suffering from great pain, she faithfully visited a sick co-sister from her former local community until the sister died. Two days later, Sister M. Theodosa followed her into our eternal home, which was a surprise for us, but corresponded to her own expectation. May God reward her for her silent dedication and her sisterly faithfulness!