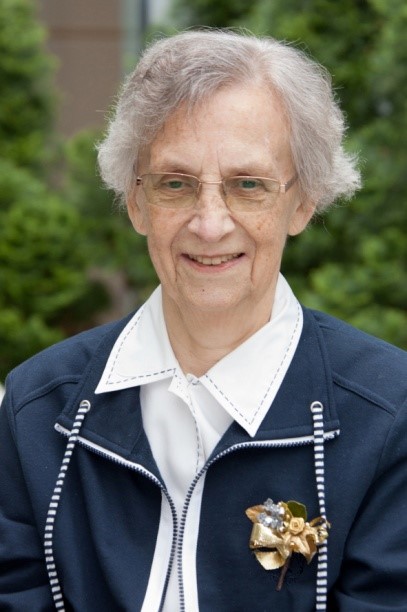 Being allowed to fall asleep when you are tired and drop a load which you have born is a gift from God. Sr. M. Willibrorda received this gift on Saturday, June 4.

With her 3 sisters and 2 brothers, Sister M. Willibrorda, née Anna Hoffmeister, grew up in a religious family in Benteler / Westphalia. Her love for nature developed through her life in a rural environment and she enjoyed colorful bouquets of flowers and orchids until the last phase of her life.

After completing her 8 years at the basic elementary and secondary school, she assisted her mother with the housework. She also helped her teacher with the care and nursing of her mother. Then she spent time on a farm with apprenticeship in Ahlen to study housekeeping.

In 1955, she followed a young woman from her hometown and entered the Sisters of Notre Dame in Coesfeld. After her final profession in 1962, Sister M. Willibrorda served as a cook in various places, usually in big kitchens such as in Vechta, Coesfeld, Wangerooge, Marl, and finally at the Vinzenzwerk in Handorf. When the community was closed there in 2014, she moved to the provincial center in Coesfeld. In her retirement home, she often got visits from her former apprentice cooks who had come to appreciate her as a person and as a cooking teacher and who loved sharing common memories.

Sister M. Willibrorda was a soccer fan of the FC Bayern Munich club. On her golden jubilee, she received a congratulation from Karl Heinz Rummenigge.

Sister M. Willibrorda was not a woman of big words. She did what was necessary with much love and care and avoided what she thought was superfluous. She was a religious woman with a sense of humor, and she was kind and affectionate to people. She liked to be in community, to celebrate, to laugh, and to pray. When she was in Handorf, she often visited the Marian place of pilgrimage Telgte, where Mary is venerated as the comforter of the afflicted. For each Christian and especially for consecrated Christians the main commandment says, “You shall love the Lord your God with all your heart and with all your soul and with all your strength and with all your mind, and your neighbor as yourself”. In her decades of kitchen service, Sister M. Willibrorda made something of this unity visible. She certainly knew, “Love goes through the stomach“. That might also have been the reason why she loved the psalm about the Good Shepherd (ps. 23).

In 2016, Sr. M. Willibrorda suffered a fracture of the neck of the femur, and she broke her arm. That was the reason she moved to the infirmary. She adapted to the new situation and gratefully accepted the help and affection from the nurses, her family and co-sisters. A week ago, her health deteriorated. On the Saturday before Pentecost, she breathed her last. The Lord, who had been her Shepherd, will not let her lack anything.