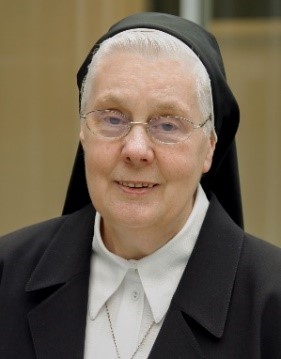 This quote from the reading of the third Sunday of Advent became reality for Sister Maria Williburg the night before, when the approaching Lord called her home.

Adelheid Terbrack, called Adele, grew up with seven brothers and sisters. Three further siblings died as children. Her parents, Hermann and Anna Terbrack, ran a small farm and her father worked as a street warden.

After completing basic primary and secondary school, Adele first helped her mother with the housework. After that, she worked on a farm in a neighboring village for one year and then for two years in a hotel. In both places she acquired basic knowledge in housekeeping.

In October 1960, Adele started her religious formation with the Sisters of Notre Dame in Coesfeld, whom she knew from Vreden, and in 1963, she completed her novitiate as Sister Maria Williburg. Then she improved her housekeeping knowledge in different houses of the Congregation and graduated from a technical school for housekeeping in Paderborn. After a further course, she acquired the qualification to be a trainer in housekeeping.

Sister Maria Williburg then assumed the leadership in various convents: the Pius-Kolleg in Coesfeld, Kloster Annenthal, and the Liebfrauenstift in Gelsenkirchen, a home for senior citizens. In Gelsenkirchen, she was also in charge of the cafeteria. Here grew her love for the elderly and needy, whom she served with great commitment and loving affection.

In addition to her ministry, Sister Maria Williburg attended a three-year training course to become a home manager in residential care facilities for the elderly, which she successfully completed in 1996.

In 1998, Sister Maria Williburg came to Kloster Annenthal to take care of her elderly and sick sisters and to assume the tasks of the home manager. With great care and self-evidence she was there for her co-sisters. Ready to help at any time, calm, friendly and, above all, discreet, she was affectionate to everyone. Grateful to be able to hand over the management of the home to a younger member of staff, she remained a reliable contact person who was appreciated by all the residents and collaborators and for whom no work was too much until her illness.

In addition to her co-sisters, she maintained close contacts to her siblings and their families. She shared their joys and especially their worries which she silently carried to God in prayer.

For some time, our sisters had realized that Sister Maria Williburg did not feel well, but she never complained. When she was taken to the doctor, he immediately admitted her to the hospital. A surgery helped her and gave hope for a speedy recovery, but a severe pneumonia put an end to her life. Deeply sad but filled with gratitude, we remembered her in our celebration of the Eucharist on Gaudete Sunday. We became aware of the reality of the quote “The Lord is at hand”! for each of us.

May Sister Maria Williburg now experience the closeness of the Lord forever.