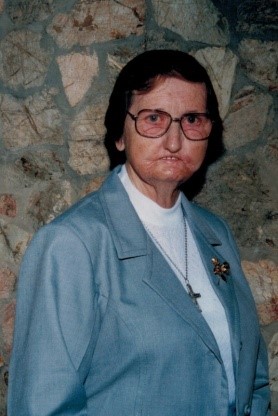 “Jesus, be my salvation!” was her daily prayer. This was the first Christian prayer and expressed her confidence in Jesus as the Savior. It was also her strength during the long years of Consecration as a Sister of Notre Dame.

She was the second of the children born to João Braun e Paulina Seibel Braun; she had 5 brothers and 5 sisters, between them Sister Maria Anita Braun, also a Sister of Notre Dame. The family educated the children into the Catholic religion with joy and simplicity. After her school years in Selbach, at the age of seventeen, Maria Wilma entered the Sisters of Notre Dame in Passo Fundo. There she received her religious formation and continued her studies. She graduated in teaching and taught for 40 years. Children loved her and learned to read very soon; Sister was a teacher for the first grade. During her life she dedicated very much time to meeting families to study the gospel, the apostolate of prayer, to community services in the garden and the kitchen. Her dearest experience was the work with the poor in the neighborhood, where she learned much, as she herself said. Sister Maria Wilma rendered her services in education in many schools in both the states of Rio Grande do Sul and Santa Caterina, and for years helped in boarding houses that existed in many schools until the 70s.

Since 2006, Sister had her home in Casa Betânia, Não-Me-Toque. In the beginning she was able to contribute small services, but but with the advancement of the cancer in her face, she needed more care. From 2014 onwards, she dedicated herself to the apostolate of suffering with awareness and selflessness. “We know that all things work for the good of those who love God, who are called according to his purpose.” (Rom. 8,28)In her letter about Sister Maria Wilma, Sister Arací Maria, Provincial Superior, wrote: “Because you were ” faithful unto death, and so we believe that you shall receive the crown of life”, as in recent years , your life was a slow martyrdom.”

In the morning of January 20, 2016, God called Sister Maria Wilma to His eternal home. Now she is free from her pain. Thank you, Sister Maria Wilma, for your example of patience, love, and detachment; for your love for Mary, because you taught us to live by faith, bearing the suffering, fully delivered into God’s hands. Pray for us so that we live in fidelity until the end of our lives.