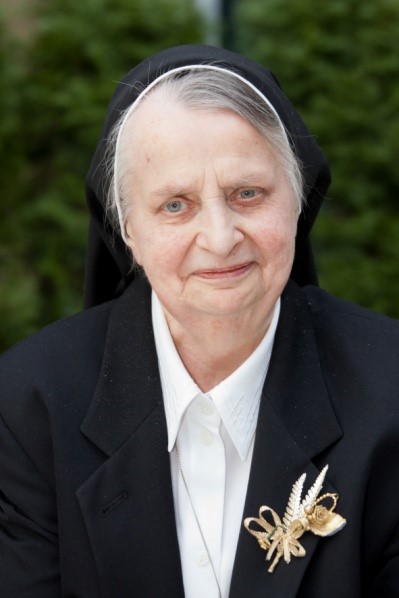 The first verse from the Shepherd’s Psalm accompanied Sister Maria Wiltrudis during her religious life. This strong statement of faith was like a “rock in the storm” for her, because she could trustingly rely on her “shepherd” in all situations of life. She always felt strengthened, comforted and encouraged by the words of the Psalm.

Sister Maria Wiltrudis, Maria Thesing, was the daughter of the married couple Anton and Anna Thesing and grew up together with seven brothers. She attended elementary school in Gaupel, graduating in 1955. She then supported her mother in the household and with the agricultural work on the farm, which her father ran as a sideline.

In 1962, Maria came to Büren as a trainee cook in order to expand her knowledge of cooking and baking in the canteen kitchen of the Liebfrauenschule with its attached boarding school. After one year, she took over further tasks in the housekeeping area. She felt very much at home in the house and was a welcome and responsible employee. The sudden death of her mother required her to return to her parents’ home after only a short time. There she took over the housekeeping for her father and brothers, some of whom were in professional training.

In 1976 she was given the opportunity to train as a housekeeper at the Meinwerk Institute in Paderborn. After short assignments in the Liebfrauenhaus Gelsenkirchen and in the Burse in Münster, Sister M. Wiltrudis returned to Büren in 1981 to her former place of training. Here a wide field of work in various housekeeping areas awaited her. She gladly took over the reception desk, which enabled her to make many beautiful handicrafts on the side, which were sold at a bazaar for our mission areas. It also provided ample opportunity for her to enjoy reading. By reading the newspapers every day, she was well informed about what was happening locally and worldwide.

Sister Maria Wiltrudis gladly set out every morning to pick up the mail for the school. In addition, she supplied the sisters’ refectory and took on room maintenance work in the sisters’ house. Her pride and joy were well-maintained curtains as a “showpiece for the house.” The annual curtain washing for the whole school was a matter of course for her.

Due to her full commitment and her age, her physical strength was diminishing. In the course of the transfer of the high school to another school authority and the dissolution of the convent, Sister M. Wiltrudis left Büren, which had become her home in the meantime, after 35 years, and came to the Annenthal convent in Coesfeld. She was glad that she now had more free space for prayer. Due to a fall, she suffered a fracture of the leg, which had to be treated surgically. Afterwards, she was severely limited in her mobility and gratefully took advantage of the necessary support from the nurses. She left her room only for short trips. She celebrated Holy Mass via the convent channel and was grateful that Holy Communion was brought to her room.

In this way she experienced the “pastoral care” of her Lord even in the last phase of her life. Sister Maria Wiltrudis now followed his “shepherd’s call” to always be with him.