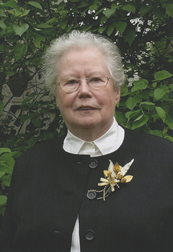 “In my God is the joy of my soul; for he has clothed me with a robe of salvation.”Is 61:10 (from the reading of GAUDETE Sunday, the day of her death)

“Last summer (1958), I had the occasion to go on a trip to Rome with the Sisters of Notre Dame. In Rome, it occurred to me to dedicate my life to Christ;” this is what Sister Maria Xaverina wrote in her curriculum vitae on entering our congregation. Before she came to that decision, she had literally “mastered“ important stations in her life. In 1955, she took the master’s examination in ladies and men’s tailoring at the Chamber of Commerce in Koblenz and then she worked in a big ladies and men’s tailoring shop until she entered the congregation. The above verse from the reading of the day of her death could not have been more appropriate because Sister Maria Xaverina has sewn many “robes“ in her life, she has taught sewing and thus clothed many people; she was always ready to help when her co-sisters needed clothes.

Ursula was the second of seven children. Her elder brother Franz was killed in the war near Ravenna. Since his patron was St. Francis Xavier, Sister Maria Xaverina has always felt closely connected to him by her religious name. Twice, she had the opportunity to visit his tomb, which was a great joy for her. In 1936, her next younger sister Anni died as an infant, just before the family moved from Essen to Neuwied.

After completing school, Ursula helped her mother to look after her four younger siblings; this led to the special relationship she maintained with her siblings. As a young girl, she took part in the activities of the parish youth; with great enthusiasm, she talked about their activities and undertakings.

In 1961, in her second year as a novice, Sister Maria Xaverina came to St. Tönis, where she remained until the community was closed in 2008. Marienheim in St. Tönis had become her home. This house of the parish was connected to a kindergarten and later to a daycare center for children, where different kinds of groups met and cooking and sewing courses for women were offered. First, Sister was entrusted with the management of the sewing courses and later with the management and organization of the whole house. Sister was not a woman of many words, but she was clear, firm, competent, and reliable. She was pragmatic by nature, which was highly appreciated. First, the “necessary“ sewing was most important, such as mending, changing, “from old make new“, etc. Later, she helped to realize fashionable ideas of clothing. No model was too complicated for her; she made the cutting pattern herself. So she accompanied generations of women. Her down-to-earth piety easily led to inspiring religious conversations at the cutting table and at the sewing machine.

After the closing of the community in St. Tönis, Sister Maria Xaverina came to Josefshaus in Bonn, where she used her skills for her co-sisters and for the residents of Maria Einsiedeln, a home for senior citizens, until she moved to Haus Salus in 2015. In Haus Salus, she said from the beginning that she felt well looked after and that she could not understand when someone was not quite content here. During these last months, her general condition deteriorated; but although she became more and more dependent, she was grateful for all help. Her characteristic humor often made us smile. In her matter-of-fact way, she also expressed her readiness to die.

Now we know that Sister Maria Xaverina peacefully rests in God’s embrace. He has clothed her with “a robe of salvation.”