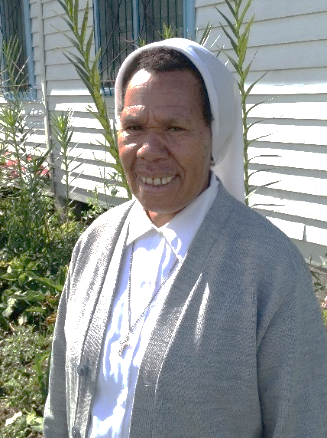 Come you who are blessed by my father…
inherit the kingdom prepared for you from the foundation of the world. Matt 25:31

Bernadette Bu was born to Simeon and Veronica Serao in Tsak Pumakos in the Yangel Village in the Enga Province of Papua New Guinea as the youngest of four children. She attended St. Thomas School in Tsak Pumakos for grades K-6 and then attended Notre Dame High School in Kumdi, graduating in November 1974.

Always desiring to be a Sister, Bernadette entered the Novitiate of the Sisters of Notre Dame and was invested in 1975. She attended Holy Trinity Teachers’ College in Mt. Hagen earning her teaching degree which allowed her to minister at various primary schools in the Western and Eastern Highlands for 27 years as an excellent teacher.

Her faithfulness and great love for our international congregation was evident by her participation in congregational events. Sister Marie Bernadette participated in the International Congress on the Apostolate held in the USA in 1983, where she presented a paper on Papua New Guinea. She also traveled to Rome for the Formation Course and participated as an elected delegate for PNG in the General Chapter of 1992. In 1997 she participated in the Spirituality Symposium in Brazil and then in 2009 joined the Sisters of the Toledo Province for their Provincial Chapter.

With great love and respect for the young women discerning their religious vocation, Sister was the formation directress of candidates and junior professed. In 2017 she eagerly accepted the invitation to be part of the SND Formation Team in Bataan, Philippines for young women from Asia, including women from PNG, the Philippines, China, Vietnam, South Korea and Indonesia.

Returning from the Philippines in February 2020 because of medical reasons, she was lovingly cared for by the postulants and professed sisters in PNG during these past months. She was faithful to her vocational call with joyfulness even in these times of suffering and pain. Lovingly she was called by the Almighty God to give herself into his waiting arms. She entered her eternal rest while on her way home from the hospital to be with her Sisters and family in her final hours.

May she rest in God’s loving embrace.