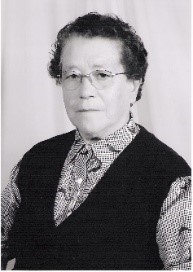 “The good God shows the truth, I clearly feel that everything comes from him.” (Saint Therese of Lisieux)

On the Feast of Saint Therese of the Child Jesus, whom she venerated as her patroness, Sister Marlise Terezinha heard the call to eternal life from the good God whom she had loved and served during her earthly journey.

Hedoir Terezinha Müller was born on February 12, 1935, the last of thirteen children. Her parents, José Müller and Amélia Genro earned their living from agriculture. Although as a young adult, Heldoir felt the call to religious life, her elderly mother needed her care. Therefore, she remained with her family and took care of her until her death in 1971. In the same year, Hedoir became a postulant of the Sisters of Notre Dame. When she entered the Novitiate on February 10, 1972, she chose Sister Marlise Terezinha as her religious name.

After completing her novitiate in 1974 and showing an aptitude for caring for aging and ill persons, Sister remained in the Provincial House and attended Nursing Assistant classes. From then on, she dedicated herself to caring for the sick and the elderly.

Sister Marlise Terezinha began her ministry at Clínica Olivé Leite, Pelotas, working in the Nursing department and later at Santa Casa de Misericórdia, São Lourenço do Sul. In 1981, she joined Lar do Idoso Rosinha Borges community, Caçapava do Sul. For thirteen years she assisted the elderly residents, serving them with concern and love. For the next twelve years – from 1994 to early 2006, Sister dedicated herself to the night duty at Recanto Aparecida, where she again cared for the elderly sisters with devotion and affection. In 2006 she joined the Madre Júlia School community, São Sepé, helping with the household chores.

Sister Marlise Terezinha loved nature and enjoyed cultivating flowers and taking care of the vegetable garden. She experienced great joy whenever she was able to offer her produce to the community. Due to her age and health, the Provincial leadership suggested that she engage in lighter occupations, but Sister loved her work and considered it relaxing to be in nature in the company of her kitten Mimoso. She also kept in close contact with her family members and liked to visit them.

Sister Marlise Terezinha faithfully participated in community life and its activities and liked to tell stories in great detail. She also deepened her spiritual life through personal and communal prayers. Each year, she joined the group of elderly and infirm Sisters for the yearly retreat. On September 22, 2021, Sister came to Canoas to participate in the annual retreat. On September 24th and 25th, she took advantage of the days preceding retreat and went to see her nephew’s family in Porto Alegre.

When she returned in the evening, Sister said she did not feel well. Nurses from Recanto Aparecida monitored her care and she came through the night well. The next morning, she was taken to Ulbra University Hospital, in Canoas, for tests, since she had been undergoing cardiac treatment for years. Sister Marlise Terezinha was admitted to the hospital on September 26th and remained there until the evening of October 1st, when she quietly went home to God, leaving her sisters surprised by her unexpected departure.