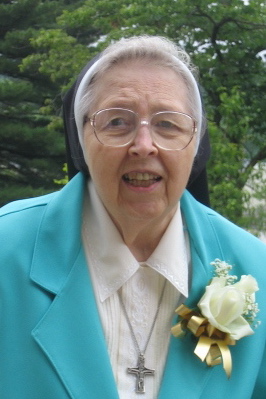 Ann Mary Riehle was born on August 2, 1926 in Milford, Ohio, the oldest of five children. Her two younger sisters later entered Notre Dame, taking the names of Sister Mary Rose Emma and Sister Mary Helen Joseph. Ann attended the public school in Milford until in 1936 the family moved to their uncle’s farm in Loveland, Ohio.  Her father later bought his own farm.  He was also a master carpenter who built the convent for the sisters at St. Columban, Loveland.  Being the oldest, Ann helped her mother who was a homemaker as well as helping on the farm until she became an Aspirant as a freshman attending Notre Dame Academy.  She professed her vows in 1946 but began her teaching ministry the previous year.  In 1957 Sister received a degree in elementary education.

Sister Mary Adrienne spent 20 years as an elementary teacher in several schools before receiving a Master’s Degree in library science in 1965 from Rosary College in River Forest, Illinois.  As a school librarian she ministered in elementary schools, high schools and at Thomas More College, where she became head librarian. Here she was instrumental in attracting two young women to enter Notre Dame. Later Sister M. Adrienne returned to classroom teaching for another 14 years.

Sister had a love of teaching especially the poor and marginalized children.  Her years in the home missions were especially dear to her.  Her favorite places for ministry were Birmingham, Alabama with the African-American students and with the poor in Harlan, Kentucky.  It was in Harlan that the sisters visited the impoverished families in their hovels. She was always ready to give in whatever way she could to help the disadvantaged. Sister M. Adrienne’s love for the Eucharist was manifested in Harlan as she and the other sisters were willing to travel a distance to attend the Eucharistic Celebration when no other was available. Another joy for her was teaching catechetics during the summer months.

In her role as librarian, Sister M. Adrienne especially enjoyed working with the students at the Diocesan Catholic Children’s Home.  She loved the little ones and for 14 years attempted to supply some of the care that they had missed in their neglected home lives.

In 2005 Sister retired to the Provincial House assisting with various duties. As her health deteriorated and she became weaker Sister M. Adrienne became a member of Lourdes Hall Care Center.  She passed the time reading, and enjoyed visiting with her natural sisters and friends.  Sister was always grateful for services rendered and participated in all the activities provided.  When asked about this she remarked that if someone had taken the trouble to provide a program, she could show her appreciation by attending it.

For about a month before her death, she could take only liquids.  However she never lost her love for sweets.  In the afternoon of April 16, Sister Mary Rose Emma went to her room for a visit.  She discovered that Sister Mary Adrienne had already passed on to her home with the Risen Jesus. May she live in joy and peace in God’s loving embrace for all eternity.