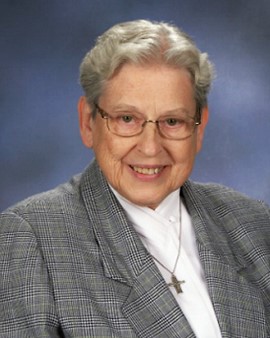 Mary Anne was the second of six children born to Emery and Mary Anna ((Mudri) Blasko. The family lived in Cleveland where her mother served as a nurse and her father worked in the steel industry. Mary Anne often took care of the children while her parents worked to support the family, and she dreamed of becoming a nurse like her mother. When she was fourteen, the family moved from the city to a 72-acre farm in the country, very close to Chardon. Here everything was a new and exciting experience. After high school graduation, Mary Anne took the entrance exam for St. Alexis Hospital School of Nursing in Cleveland and received a full scholarship.

She earned her degree in 1954 and certification as a Registered Nurse in 1955. During her time of studies, she became friends with two religious sisters and realized her desire to become a religious. Because her younger sister, Veronica, was an aspirant with the Sisters of Notre Dame, Mary Anne had decided to wait before entering. But the call from God was hard to resist! She entered the Sisters of Notre Dame on February 2, 1955, the same day as her younger sister, and at investment received the name Sister Mary Emeric. She later returned to her baptismal name, Sister Mary Anne.

From the very beginning, Sister Mary Anne ministered as a registered nurse to her sisters in community, first at the Provincial House on Ansel Road in Cleveland, and then in Chardon. For sixty years she responded to the needs of others with care, compassion, a welcoming spirit and an empathetic heart. She considered it an honor to walk with and minister to her sisters when their life’s journey brought them to the Health Care Center. She was respected for her professionalism, efficiency and interest in the well-being of the sisters she cared for. Her calm and comforting, yet matter-of-fact, manner was appreciated and valued.

During the time of semi-retirement, Sister Mary Anne served as health consultant for the sisters living at the Provincial Center. She assisted with the Prayer Phone Line and was dedicated to her ministry of Prayer, Presence and Praise. Sister loved music and was for many years a member of the convent choir and the Good Tidings Choir. She was a good conversationalist and listener, a gentle, understanding and loyal friend who loved a good time and a good joke. Sister treasured each member of her family and enjoyed celebrating life with them.

In just the past two months, Sister’s health began to decline and her strong heart was affected.

We are grateful that her time of suffering was short and we pray in thanksgiving for a life devoted to serving and caring for others. May Sister Mary Anne know eternal rest in the loving embrace of our good God.