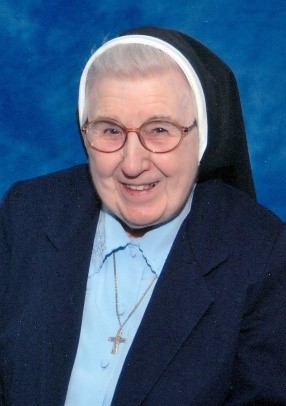 On the morning of February 11 at the Ursuline Center, Sister Mary Bernarda gave back to God her life of 97 years. Born Rita Ann, she was the youngest of nine children born to Charles and Mary Ann (Schoen) Sullivan. Preceding her in death were her parents and all her siblings including her older sister, Sister Mary Theophane, S.N.D., who died in 2011.

With degrees in Education and English, Sister Bernarda was a highly effective educator whether as a teacher or principal in the elementary schools and as a secondary teacher. Through her 51 years of teaching and eight years as a librarian, Sister was well liked by her students, especially the boys whose football and basketball games she faithfully attended. Not only was she an excellent teacher herself, but she also helped mentor young sisters who were transitioning from the elementary level to high school.

She was well read and widely read and loved a stimulating debate on current issues. A good discussion would either confirm her view, modify it, or completely change it. Sister was very articulate in expressing her views. Books were her friends, and she loved talking about what she had read. She was especially attracted to biographies of persons who lived their lives in such a way as to make a difference in the world—a difference for the better. She was very other-centered and took keen interest in the events and the lives of those who crossed her path.

The oldest Sister in the Toledo Province, Sister was in her 77th year of religious profession retiring from active ministry in 2006. Even in these last years when confusion and physical pain burdened her, she strove to meet each day with a resolve to remain engaged with her surroundings. Sister Mary Bernarda’s character while marked by strong determination, also had a lighter side. She could laugh at herself. She observed to a close friend: “We take ourselves so seriously that God must find us amusing.” May the God she served and loved so well in this life now smile on her for all eternity.