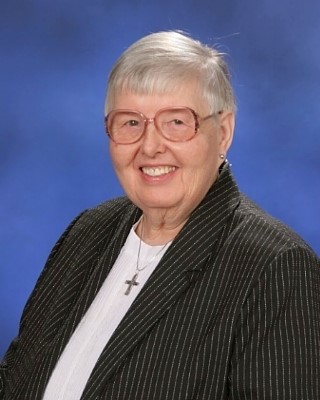 Catherine Dorothy was the second of the four children born to Adam and Lottie (Stanczyc) Romancik. She and her siblings grew up in a love-filled home where her parents nurtured strong faith and pride in their Slovak heritage. Catherine’s initial fear of school blossomed into being a student hungry for knowledge and awed by the wonders of academic life. After graduating from Our Lady of Good Counsel Elementary School in Cleveland, Ohio, Catherine was accepted at St. Stephen High School, Cleveland. Throughout these four happy years, she took on various jobs to cover the cost of tuition.

The idea of a religious vocation was considered from time to time. In her junior year, Catherine was led to accept the call to become a Sister of Notre Dame; this decision brought her a sense of peace and contentment. She became a postulant on September 8, 1946, and at investment received the name Sister Mary Roy.

Sister Mary Catherine earned a bachelor’s degree in French and history from Notre Dame College in South Euclid, Ohio, and a master’s degree from John Carroll University in University Heights, Ohio. Sister taught in secondary schools in the Diocese of Cleveland for over thirty years. She was an energetic teacher and shared a love for learning with her students, especially in teaching French, with its rich history and multicultural dimensions. A gifted writer, she co-authored the Light of the World religion textbook series for high school students.

In 1987 Sister moved from formal classroom teaching into a second area of ministry. She received certification as a Pastoral Minister and served for six years at St. Michael Parish in Canton, Ohio. In 1993 Sister Mary Catherine transitioned into a ministry dear to her heart, that of Hospital Chaplain. She recognized that “every person is spiritual by nature,” and considered it a privilege to accompany patients and their families in the most vulnerable and sacred moments of life and death. Sister served with an interdenominational team of chaplains and coordinated spiritual care volunteers for the next fourteen years.

Returning to Chardon in 2008, Sister Mary Catherine continued pastoral care outreach at University Hospitals, Geauga Medical Center. At the provincial center, she devoted many hours to the Prayer Line Ministry, speaking with callers and praying with them. In 2011 Sister assumed the responsibility of editor-in-chief for Notre Dame Prays, a prayer book for the Sisters of Notre Dame in the USA which mirrors the Church’s Divine Office.

Grace and graciousness were reflected in her fidelity to the life to which she had been called. Her interest in and care for others were given freely. With a positive attitude in the midst of her own physical challenges, Sister Mary Catherine never hesitated to enrich the lives of all she met each day. May she rejoice in the unconditional love of our good and provident God.