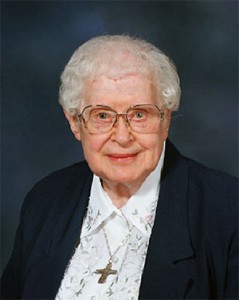 Four years after her birth, Eleanor’s mother Magdalene (nee Weber) died during the influenza epidemic and left her father, James, with two young children. They were welcomed, loved and cared for by their extended family. After several moves, the family made their home in Cleveland, Ohio, where Eleanor attended St. Thomas Aquinas School for the middle grades. Before he died in 1929, her father arranged for his sister to care for the children and enrolled Eleanor at Notre Dame Academy, Cleveland, for grade eight. She graduated from the Academy and entered the Sisters of Notre Dame on September 8, 1933. At investment, she received the name Sister Mary de Angelis.

Sister Mary de Angelis completed her college education by attending summer and Saturday classes. She received a bachelor’s degree in education and a master’s degree in administration, both from St. John College, Cleveland. For over thirty years, Sister ministered as teacher, principal and community supervisor in elementary schools in Ohio, Tennessee, Florida and Washington, DC. Ten of those years were at Campus School of The Catholic University of America, a demonstration school for teacher training in Washington. Sister Mary de Angelis also had the unique experience of preparing children for First Communion at the National Shrine of the Immaculate Conception in Washington.

In 1971 Sister was missioned to begin the project of producing a new religion textbook series, Christ Our Life, published by Loyola Press for elementary grades. While working with a team of sisters, Sister Mary de Angelis served as editor for fourteen years and provided her writing skills, leadership, vision and the encouragement necessary for this tremendous undertaking. She was resolute and totally dedicated to the initial publication and subsequent revisions of this much-needed series. Today, these textbooks are used worldwide in print and electronic formats.

During a thirty-day retreat, Sister recognized God’s call to become an adoration sister in Rome. Due to health conditions, she was not able to answer that call to Rome but was missioned to Prayer Ministry here at home. Since 1993, Sister has ministered to sisters in the Health Care Center with daily visits, kindness, compassion and prayer. Through her Prayer Ministry, Sister has reached out in remembrance and love to family, friends and all she has encountered through her various ministries. She has prayed for those places in the world she would never go and those people she would never know. We are grateful for the gift of her life as she reflected God’s goodness and provident care to all. We rejoice as Sister Mary de Angelis now rests in the heart of God.