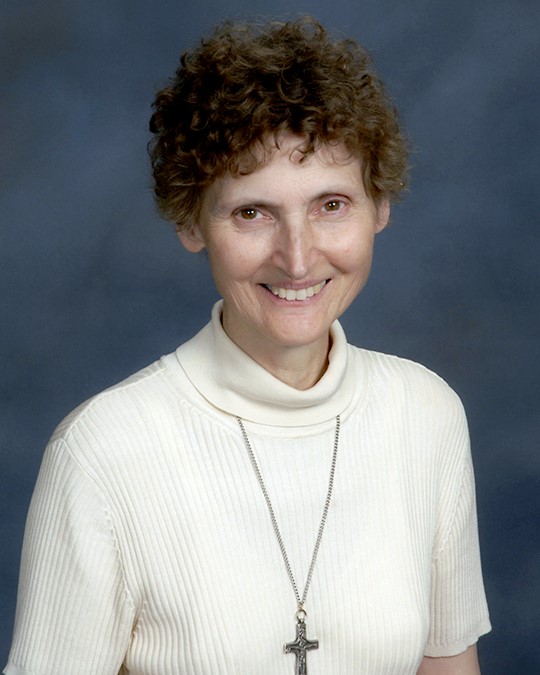 For a newspaper interview about religious life Sister Mary Dorothy noted, “It’s not enough to just talk about our faith; we have to live it, to give living witness of people in love with God and life.” Sister Mary Dorothy believed that in doing so she fulfilled God’s purpose for her life.

Dorothy Elizabeth was the youngest of three children born to Matthew and Franziska Mueller Fuchs. Both parents were born in Germany, and after their marriage, came to the United States and lived on a farm in South Dakota before moving to Cleveland in 1935. Dorothy shared with her father a love for nature and a great respect for the earth, with its changing seasons and times for planting, tending and harvesting. At the parish elementary school, Our Lady of Good Counsel, and then in high school at Nazareth Academy, Dorothy was a good student and valued education. She made friends and developed many interests.

After graduation Dorothy attended Notre Dame College, where she studied dietetics for two years. Interaction with wonderful friends and the simple and deep faith of her parents were part of God’s providence in helping her realize and respond to the call to religious life. Dorothy entered as a postulant in August 1966 and at investment received the name Sister Mary Dorle. Later, she returned to her baptismal name and became Sister Mary Dorothy.

To prepare for ministry in secondary education, Sister Mary Dorothy changed her major from dietetics to social studies. She received a bachelor’s degree from Notre Dame College and a master’s degree in history from John Carroll University, Ohio. From 1969-1999, Sister was a conscientious, organized and energetic teacher, straightforward but loving to delve into details. Students appreciated and enjoyed how she would make subject matter come alive. Reverence for all of creation and interest in issues of social justice were a part of her life and her lessons.

In 2001, after obtaining a master’s degree in theology from St. Mary Seminary in Cleveland, Sister Mary Dorothy served as a pastoral minister at St. Michael the Archangel Parish, Canton, Ohio. Pastoral ministry became an expression of God’s loving mercy at work through her. She noted, “I like people and care about them and want them to experience the joy God intends for them.”

When illness brought her to the Provincial Center in 2013, Sister continued to be a woman on mission as she fought hard to regain her strength. She remained young at heart, a great conversationalist who recognized the good in everyone—always interested in and attentive to others. She dedicated herself to serving her sisters in community. She would do anything for anyone at any time, with a smile. In mid-July 2017, Sister Mary Dorothy experienced serious health complications and made the decision to begin hospice care. She was grateful for all who held her in prayer and love during her journey home to God. May Sister know joy and fullness of life in the eternal embrace of our good God.