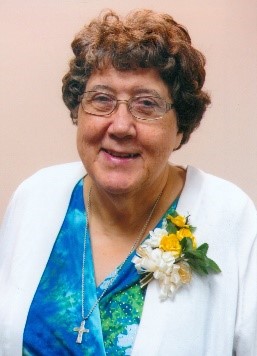 “We have come to know and have believed the love that God has in our behalf.” This refrain from one of Sister Mary Helaine’s musical compositions characterizes Sister’s life. Her confidence in God’s love expressed itself in art and music and enabled her to serve in outreach despite many physical difficulties. On Thursday, the feast of the Transfiguration, God called Sister to her heavenly home.

Sister was the youngest of three children of the late George and Helen Ehrman. Since her two siblings were nine years older than she, her parents decided to foster young children so that Phyllis would have companions to play with during her growing years. She had over 70 foster brothers and sisters during those 10 years.

She attended Saint Joseph School in Fremont for her elementary education, and Notre Dame Academy in Toledo where she was an aspirant for four years. During these twelve years of schooling she experienced the compassion and dedication of the Sisters of Notre Dame. Thus she entered the Congregation in 1962 and professed vows in 1964 to the delight of her family.

Music was her love. As a kindergartener Phyllis played the accordion, and in second grade she began lessons on the piano. She was a member of the school band until she became an aspirant. She learned to play violin, harmonica, trumpet, flute, horn, guitar, bass, piano and organ. She was second violin in the Perrysburg Symphony Orchestra. She received degrees in music from Mary Manse (Toledo) and Bowling Green State University.

Sister taught Music at Notre Dame Academy Toledo where she conducted the orchestra, gave music lessons at the Notre Dame School of Music, and was organist for the local community. As choir director for the provincial center, she conducted the sisters’ choir and planned many liturgical celebrations. For fifteen years she also involved herself in parish life as pastoral associate, liturgical minister, and music minister in the Toledo Diocese. Sister edited and created large print editions of over 300 musical compositions copyrighted by the Sisters of Notre Dame.

Since declining health necessitated retirement from active ministry, Sister spent these last years in service and outreach. She made rosaries, crocheted hats for the children in the central city catholic schools, and collected stuffed animals for the Mareda Center. Her care and concern for others enticed her to plan parties and gatherings for family and friends. Despite her intense suffering and pain, she joyfully lived in the spirit of Our Lady, Notre Dame. May she experience the freedom of the spirit lifting her to her loving God.