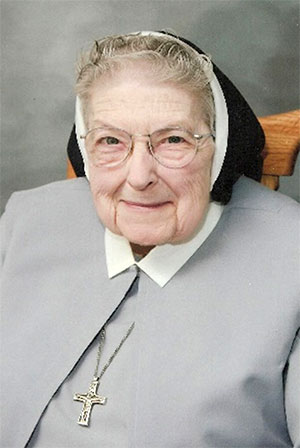 Irene was born into the family of Bernard and Agnes Fenn Heinl and was the oldest daughter in a family of thirteen children. There she learned responsibility, dedication and caring love as she worked, prayed and played with her nine sisters and three brothers. She attended elementary school at St. Ann and Sts. Peter and Paul, Toledo where she gradually became convinced that she wanted to be a teacher. Even though her mother valued Irene’s help, her parents generously allowed her to enter the aspirancy school in 1936 where she continued her education at Notre Dame Academy.

Irene began her novitiate in August of 1940 receiving the name, Sister Mary Immaculee. She pursued higher education at the Catholic University of America where she received a Master of Arts in Education, and later she attended Providence College in Rhode Island where she graduated with distinction with a Master of Arts in Religious Studies. She also received government grants to study Spanish and to become certified to teach English as a second language.

For thirty years she taught students at the elementary and high school levels. In 1968 she began her career of thirty-two years in religious education teaching CCD students as well as teaching teachers of religion. Sister Mary Immaculee was a creative and innovative educator, well-loved and appreciated. She was the first Director of Religious Education in the Toledo Province, and was one of the first directors of regional religious education centers in the Toledo Diocese.

In her years of retirement she continued to reach out to individuals in need; she taught English as a second language to migrants and those of other cultures. She became involved in prison ministry writing daily to prisons on death row. She helped initiate programs to catechize children and adults who were mentally challenged. Sister Mary Immaculee’s warm personality, sharp intellect and innate joy and enthusiasm endeared her to others. She had an energy for mission and ministry that was obvious even in her declining years. Countless are the persons whose lives she touched with the goodness of our God.

After a prolonged illness, Sister Mary Immaculee was released into the arms of God in the afternoon of December 23 at the Ursuline Center where she was a resident since 2011. May she now enjoy the peace and joy of being in the presence of the God of Eternal Love.