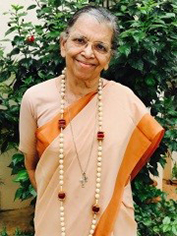 Sister Mary Jaya was born as the first child to a very devout catholic couple, Mathew and Mariam Pattimakiel. Eight days later she was baptized Elizabeth. She received her first Holy Communion and was confirmed on the same day in 1953. Three more siblings followed her: two brothers and a little sister. While in Class 8, Elizabeth was privileged to attend a retreat which is exclusively arranged for High School students. During this retreat, Elizabeth was inspired by the stories of missionaries in North India and was attracted to do mission work like them. In her auto-biography we read, “After Holy Communion I used to talk with my dear Jesus about this (my desire to be a missionary). She also must have been inspired by her maternal uncles and her cousin, Sr. Ranitta, SND, to choose religious life. Elizabeth also drew inspiration from the sodality activities in the school where she was an active member.

It is apparent that she was open to the inspirations of the Holy Spirit because she talks about the good advice she received from the bishop at her Confirmation, from her uncle, Fr. Sebastian. This openness continued to be a gentle background music in her life as we recall the docile nature of Sr. Jaya.

Elizabeth joined the Sisters of Notre Dame in 1960 in the railway town of Jamalpur, Bihar. She began her formation in the novitiate in 1964 and was given the name Sister Mary Jaya, with Christ the Victorious King as her patron. Sister took her temporary vows in 1966 at St. Joseph’s Church, Jamalpur, and her perpetual profession in 1970 at the Provincial House Chapel in Patna, Bihar.

Sister Mary Jaya completed her education and higher studies in Patna Women’s College & in Mysore University respectively. She was a zealous and inspiring geography teacher for 42 years. Being a multi-faceted person, along with her teaching, Sister shouldered many serious responsibilities. Sister Mary Jaya was the Principal of Notre Dame Academy, Patna, Local Superior in Jamalpur, Bangalore, Mysore and Vasai communities. She was Regional Superior for the South of India for 10 years, Provincial Councilor, and finally Provincial Secretary before she became completely unable to function physically.

Sister Mary Jaya’s characteristic generosity and silent listening set her apart as compassionate mentor and a valued wisdom figure for many young Notre Dames. She was always approachable, patient, humane and humorous. Though her expressions of affection were rare, all who went to her returned with the joy of being understood – be it her students, colleagues, parents or others.

A true missionary at heart and in deed, Sister Mary Jaya would work tirelessly, rush to the help of those who were poor with Christ-like compassion and love. She served her Master through the many works she accomplished and numerous people she influenced to be better persons. In life and in death, dear Sister Jaya, you continue to inspire us and will remain a beacon of joyful suffering for future generations.

Though Sister Mary Jaya was diagnosed with cancer in 2008, she recovered fast and returned to her mission with renewed fervor. About two years ago, Parkinson’s disease and another attack of cancer retarded her active life. Her rock-like faith in God and her strong determination enabled her to be on her own except for the past one month. By then the diseases had totally consumed her body and the Lord took her to himself at 4:30 pm on April 20th, 2018.

Dear Jaya, may your gentle presence and deep faith continue to inspire us, your Sisters, family and friends.

May you rest in peace with your Lord forever.