Go Forth to Meet Him 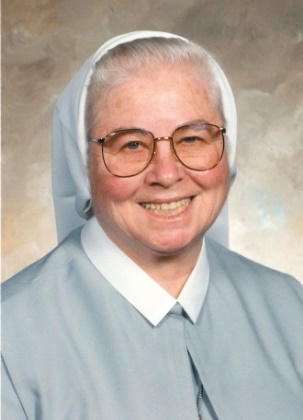 Sister Mary Jean Francis, beloved missionary for thirty-five years, died in the early morning of December 3 at the Ursuline Center where the flag of Papua New Guinea graced the nearby wall. She loved her work among the people of Papua New Guinea, she respected their culture and walked among them as she witnessed to the love and teachings of Jesus in this island country. Born to Simon and Gertrude T. Kessler Boes, Patricia Ann was the second youngest of nine girls and four boys. Patricia attended St. Mary Elementary School and Central Catholic High School in Toledo. In September of 1947, she entered the convent of the Sisters of Notre Dame and later took the name of Sister Mary Jean Francis.

With studies that led to a BA degree from Mary Manse College and an MA from the University of Notre Dame, she was adequately prepared for her many years in the classroom. Her teaching career spanned twenty-two years in the Toledo Diocesan schools and thirty-five years in Papua New Guinea. Sister left for Papua New Guinea in 1971and spent seventeen years in the PNG schools and eighteen years as secretary to the Archbishop in Hagan. Because of ill health, she returned to the States in 2006. Wherever she was, Sister Mary Jean Francis reached out to others in tireless helpfulness and inspiration.

Her ability to listen with the heart was perhaps her most precious gift shared with all who came into her life. In PNG it was her superb organizational skills that allowed diocesan events to be carried out with finesse under her directional leadership. She was known to watch out for the ones caught on the fringes of life, and sought to make sure their needs were addressed. Newly ordained priests, high school students, those living in poverty, all benefitted from her caring love.

For the past two years her home has been at the Ursuline Center in Toledo where she received the medical care she needed. In November 2016 she decided to discontinue her dialysis treatments and thus knew her meeting of the Bridegroom would come soon. How she longed that December 3 would be the day of her eternal meeting with Christ as she celebrated her nameday of St. Francis Xavier. And so it was granted. Now she embraces the One whom she loved well during her life on earth.