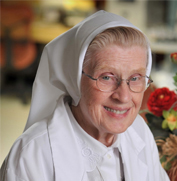 Sister Mary Jeanne Frances was born on August 10, 1934, in Covington, Kentucky. Her parents, Edgar and Regina Cleves, raised eight children, six boys and two girls. Virginia was the sixth child. She spent a happy and carefree childhood in the security of her large family. Virginia’s close connection to her siblings was an important foundation of her life.

Sister always wanted to become a nurse. She felt she first had to give her life to God and then she could help others. She often thought she had guides in her life, people who seemed to speak for God. Her sister, Sister Virginia Ann Cleves, and the Sisters of Notre Dame inspired her to choose a religious life. At the age of 19 she joined the Sisters of Notre Dame and made her profession of vows on August 22, 1955.

Sister attended Saint Frances Central School of Nursing and obtained her degree as a Licensed Practical Nurse in 1961. She then served as a nurse at Lourdes Hall Care Center, St. Charles Care Center, Covington Kentucky and St. Claire HealthCare in Morehead, Kentucky. She was also a Second Lieutenant in the Civil Air Patrol.

In May 1977 Sister Mary Jeanne Frances traveled to Indonesia to fulfill a long-held desire to serve in the missions. She ministered at a hospital in Pekalongan, Indonesia, for five years as a missionary nurse. She then returned to serve the people of Eastern Kentucky at what she called her home: St. Claire HealthCare in Morehead. She was among the first sisters at St. Claire when it opened in 1963 and touched countless lives in her 45 years of service there. It seemed that everyone knew Sister Jeannie.

Her commitment to the community was recognized in 2012 when she received the Ora L. Cline Award by the Morehead Rowan County Chamber of Commerce. She was recognized again in 2016 when she was awarded the Difference Maker Award by Congressman Hal Rogers for her dedication to health care in the Morehead region. Her love and generosity will continue to live in the hearts and minds of the Morehead community forever.

Sister retired in December 2016 to Lourdes Hall Care Center. She continued to enliven those around her by her many stories of past ministries. Sister’s enthusiasm and genuine love of those she served will be greatly missed.

After over fifty years of compassionate nursing, Sister Jeanne Frances went home to God, surrounded by her family and sisters. May God shine his everlasting light upon her. May she rest in peace.