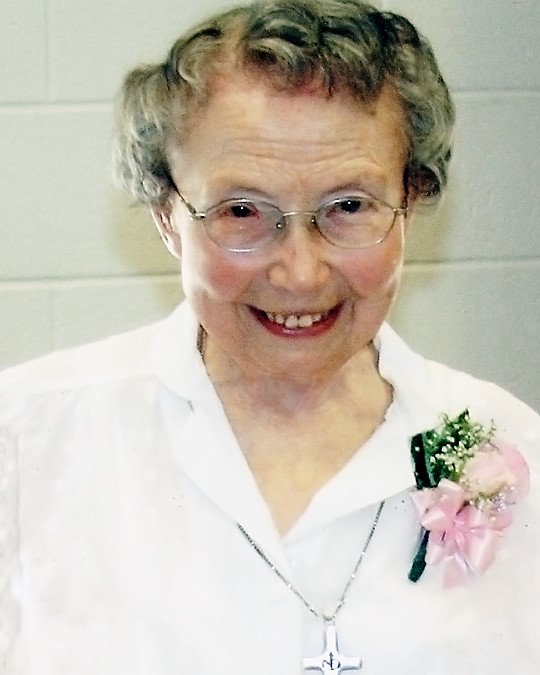 Mary Jeanne was the oldest of three girls born to Edward Clarence andLaura Marie (Lescher) Swindell. When her younger sisters arrived, Mary Jeanne proudlyshowed them off to her friends. After a happilyspent kindergarten, Jeanne said she “did not look forward to starting grade school as most other little girls do.” But when she did enter the first grade, all fears were dispelled.During her elementary years at St.Stephen School, Jeanne received her First Holy Communion and Confirmation and was received into theYoung Ladies’ Sodality.

Jeanne continued her education at St. Stephen High School and graduated on June 6, 1945. It was in high school that Jeanne thought seriously about her life’s work. She chose to apply to “become a Sister of Notre Dame and lead little children to God and His Mother.”  She entered the novitiate on September 8, 1946, and at investment received the name Sister Mary Lauramay. Later she returned to her baptismal name, Sister Mary Jeanne. As a second year novice, Sister was missioned toSt. Mary, Warren, to teach kindergarten. After profession she was assigned to foodservice at the Provincial Housein Cleveland. During the next twenty-two years she ministered in food service and lovingly prepared thousands of meals for the sisters in large and small communities.

In 1988 Sister Mary Jeanne was assigned to St. Francis School, Cleveland, as a tutor. She fulfilled her original wish to lead the little children to God and Our Lady. For the next eleven years she ministered as a kindergarten aide. She could see “eye-to-eye” with the students because she was very small and short in stature! However, there was nothing small about the way she lived her religious life. Sisterserved students and sisters alike with a generous heart and helping hands. At St. Francis shealso assumed charge of the convent kitchen, the cooking and shopping, and especially liked to shopat the West Side Market each week, regardless of the weather.Sister felt at home living among and loving the poor.

When Sister Mary Jeanne joined the Provincial Center Community, she filled her days by volunteering at Geauga Hospital, Heather Hill Care Communities and the Geauga Senior Center. She was dubbed “Mighty Mouse” by her coworkers and received an award in honor of 5,000 hours of service. Her boundless energy, her bright and welcoming smile, her ready laugh, and her open and loving heart endeared her to all she touched each day.

This year, Sister began to assist in our convent Health Care Center. She continued this service with many acts of kindness and thoughtfulness. In these last weeks she became less energetic and her physical condition declined rapidly. Sister Mary Jeanne will be remembered for her great stature of heart and her willingness to love God through service to so many. May she now rest in the arms of our good and loving God.