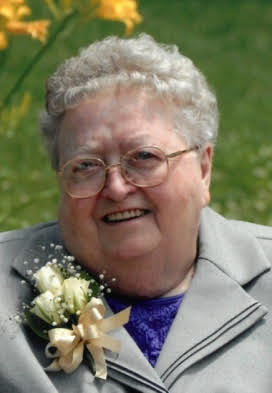 Sister Mary Joanne was born on August 15, 1929, in Covington, Kentucky.  Her parents, Edward and Anora Byron Lutkenhoff, raised five children, two boys and three girls. Joan was the oldest. Her family resided in Bellevue, Kentucky, where sister attended Sacred Heart School, Our Lady of Providence Academy, and St. Anthony Commercial School. After her schooling, she became inspired by the Sisters of Notre Dame. Her cousin, Sister Mary Alice Betigheimer, was a member of the Congregation, and at the age of twenty-seven Sister Joanne joined the sisters, making her first profession on August 16, 1959.

After final vows, sister began ministering as a childcare worker. She served in this role for twenty-four years, most of them at the Diocesan Catholic Children’s Home. The girls for whom she was group mother experienced the warmth and gentleness of her motherly care. She always made sure that on Sunday they wore their best dresses, with their hair neatly curled. In loving appreciation, some of Sister Joanne’s girls continued contact with her by their cards and visits.

After her years in childcare, Sister Joanne served in various convents, cooking nutritious meals for her sisters and assisting in the local schools. In 2008 sister retired to Lourdes Hall Care Center. She continued her love for meal preparation by helping the kitchen staff each week. When the sisters saw Sister Joanne peeling apples, they looked forward to homemade applesauce. Sister’s commitment to God and her community shone through her quiet, simple service.

The Lutkenhoff  family has always been a loving part of Sister Joanne’s life. She was preceded in death by her parents, her brothers James and Reverend Bernard Lutkenhoff, and her sister Dorothy Lutkenhoff. She is survived by another sister, Virginia Stiers, her sister-in-law, Mary Lou Lutkenhoff, and several beloved nieces and nephews.

In our quiet moments, may she remain close in spirit to us all. May she rest in peace.