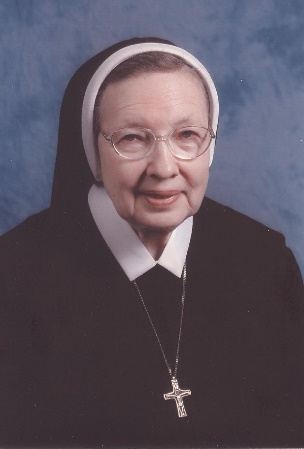 The prophet Elijah would remind us that more often than not God makes his presence known to us not in splendor but in “tiny whispering sounds.”

Early in the morning of Saturday, March 14, Sister Mary Joletta broke into the glory of her eternal reward after a life which she so generously lived in the service of the good God. Rita was the first child of Beatrice and Aloysius Boellner of Maumee, Ohio. She welcomed three more sisters and one brother and grew up in happy family surroundings. She and her siblings attended St. Joseph School, and after she graduated from the eighth grade, she entered as a Notre Dame Aspirant and enrolled at Notre Dame Academy.

It was in this warm environment that she and her siblings learned to treasure their Catholic faith and were taught the skills of home-making. In community life Sister Mary Joletta is remembered as one who donned an apron and could be found cooking, baking, canning, sewing and mending, and putting a shining touch on any room in our home.

Sister Mary Joletta’s great gift was teaching mentally challenged children and those with learning disabilities. Sister Mary Joletta began a local prayer group for the mentally challenged called Faith and Light Community, whose purpose was to share the Word of God and bring hope, creative activities, and joy to the members. Sister brought to this venture her many years of experience in teaching the mentally challenged, and those who struggled with learning disabilities. This ministry was very dear to Sister’s heart. It was a source of immense suffering when Sister had to relinquish this activity.

For fifty-three years, Sister Mary Joletta taught and guided children in primary or special needs classes; in schools in the Toledo Diocese and Mary Immaculate School. She had a wonderful gift for transmitting her love for the Eucharist to the little ones she taught.

In her later years Sister Mary Joletta was afflicted with Parkinson’s disease and severe hearing loss. She had a strong sense of community and one could see the determination she needed to put forth to be present at community activities. She walked her way of the cross with silent courage.

Because of declining health, Sister moved to our local care centers for the last four years where she received the care she needed. Day by day she worked at allowing God to enter her world and transform her until she finally reached her full potential and returned home to her Creator. May she be at peace in God’s transformative love.