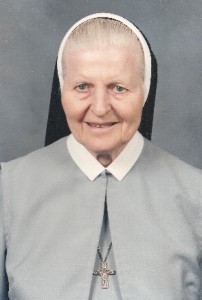 On Thursday, August 28, after seventy years of dedicated service to the Church and to the community, Sister Mary Laurann gave back her soul to the God she served so well. Her warm and generous heart embraced everyone she ministered to in her years of teaching and working with the elderly and infirm.

She developed these traits in the loving home of Matilda and August Dietrich, two brothers and five sisters. Agnes attended St. Louis and St. Thomas schools in Toledo, Ohio. After her graduation, she enrolled in Notre Dame Academy. She also loved to help her parents in their store, Dietrich Health Foods.

In her senior year, following the example of her older sister, Sister Mary Laurietta, SND who died in 1985, she entered the Aspirancy of the Sisters of Notre Dame and later became a postulant in the community. In August of 1943, she was given the name of Sister Mary Laurann. She received her degrees in education and taught middle school for forty-four years. As a teacher and later as an administrator, she served in the elementary schools in the Toledo Diocese teaching values and good character, as well as the curriculum.

At St. Wendelin, Fostoria, Sister Mary Laurann spent seven years in the school and twelve years in parish ministry where she visited, consoled, instructed, and celebrated life’s special moments with others. In 2002 when St. Anne Mercy Hospital opened, she volunteered to assist in the Pastoral Care Office where she continued to gather the estranged from the Church and help them find ways to return to the practice of their faith. She was recognized for providing opportunities for spiritual healing and for enhancing patients’ faith and prayer lives regardless of their denominational commitment.

In 2011 Sister Mary Laurann had to accept the reality that she no longer had the health and energy to continue her volunteer service at St. Anne Hospital. Her retirement marked an ending and a new beginning. She was called upon to graciously accept the limitations of aging, becoming the receiver instead of the giver of comfort. On August 28, at Rosary Care Center in Sylvania, Ohio, Sister Mary Laurann gave her shepherd’s heart back to the Good Shepherd.

May he hold her close to his heart in eternal love.